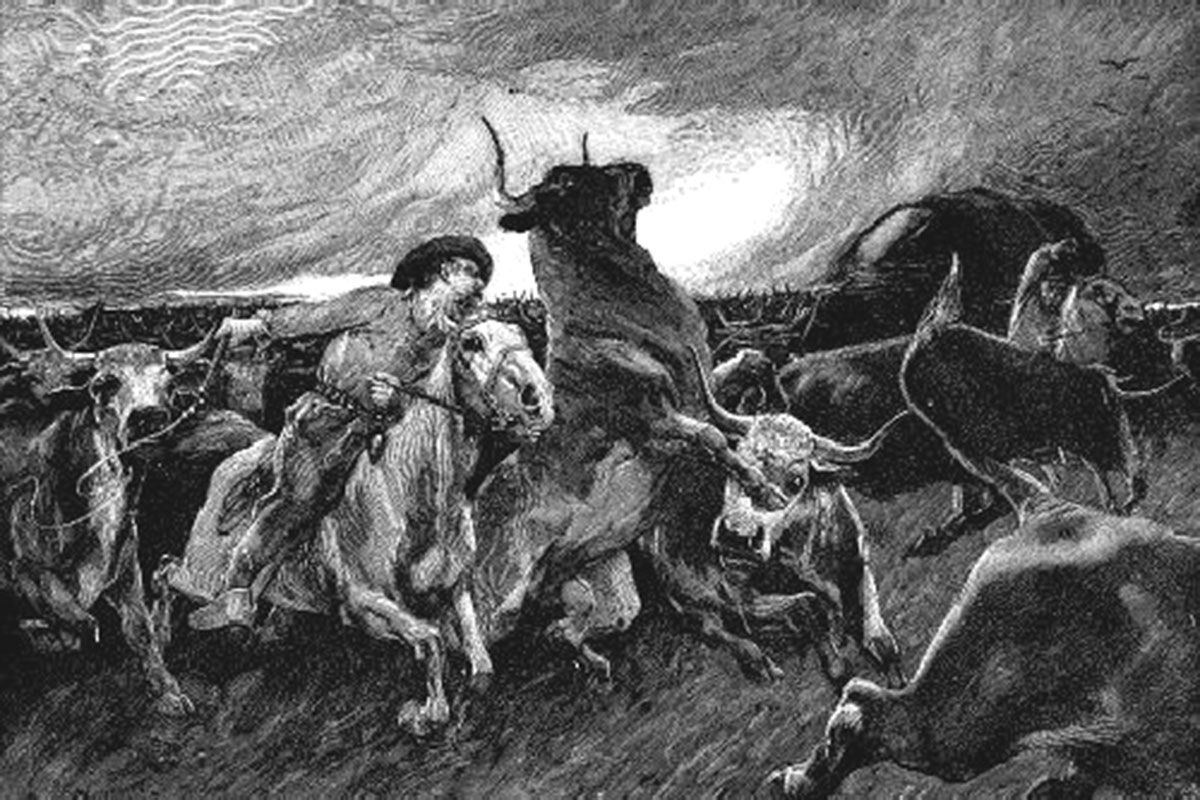 In case you’ve ever wondered about the average size of those Long Trail cattle drives in south Texas to the railheads in Kansas and how many men were required for these drives there are varying opinions. Usually, a trail herd of any size required a crew of 10 to 15 men. The trail boss usually rode point seeking water or mapping the route. The cook was up front too. Behind them were two lead riders, followed by two flankers. Off to the side was the horse wrangler. Bringing up the rear were the drag riders. The worst cowhands or the new guys usually got that dust eatin’ job.

Cattle in Texas could be purchased for three to nine dollars a head and sold at Abilene or Dodge for $30 a head.

The Long Drive traveled about 600 miles and took six weeks.

Herefords were introduced to Texas in 1876 and in the next few years replaced longhorns as the major range breed.

In 1884 a big herd of cattle were driven up from the King Ranch in south Texas and combined with another large herd at Dodge City to drive on to Montana numbered 5,600 head. However, the record, as far as we know, was by another Texas outfit that started from the Brazos River to California in 1869 with 15,000 head. They had 200 hired hands, over a thousand horses and several wagons. They were divided into four herds and camped together only when there was danger of Indian attack.

Hazards on the trail were many. Grass and water or lack thereof could cause problems. Sometimes they had to deal with hostile bands of Indians. Tribes in the Indian Territory rightfully demanded a toll of so much per cow to make up for the grass the cows grazed on while passing through their lands. It was a wise trail boss who paid the toll without a hassle. Otherwise they might return that night and stampede the herd.

Up around the Kansas border were Jayhawkers or other holdovers from the Kansas-Missouri war who might try to hijack the herd and drive it on to the railhead. Or they might ambush the cowboys on their way back to Texas and relieve the trail boss of the thousands of dollars belonging to the ranchers in Texas.

The most dangerous thing the cowhands faced were river crossings and there were many rivers to cross between south Texas and Kansas. High water, quicksand, and deep holes were a menace as were those water moccasins that lurked in the streams.

During those drives on the Great Plains chain lightning caused more stampedes than anything else. An early cowboy named G.W. Mills wrote: “Then it hit us in full fury and we were in the midst of a wonderful electrical storm. We had the following varieties of lightning, all playing close at hand, I tell you. It first commenced like flash lightning, then came forked lightning, then chain lightning, followed by a peculiar blue lightning. After that show it rapidly developed into ball lightning, which rolled along the ground. After that spark lightning, then most wonderful of all, it settled down on us like a fog. The air smelled of burning sulphur. You could see it on the horns of the cattle, the ears of our horses and the brims of our hats.”

You can imagine how that caused cattle to “stampede.”

The great Texas folklorist provided the best description of a stampede:

“When cattle stampede, they run. The herd instinct in the bovine is so great that he can go from a state of watchful relaxation with his fellows to pandemonium in an instant. It is the only ignoble thing he is capable of for he is just a poor dumb cow brute who ain’t got no mama or papa and he never went to school.”