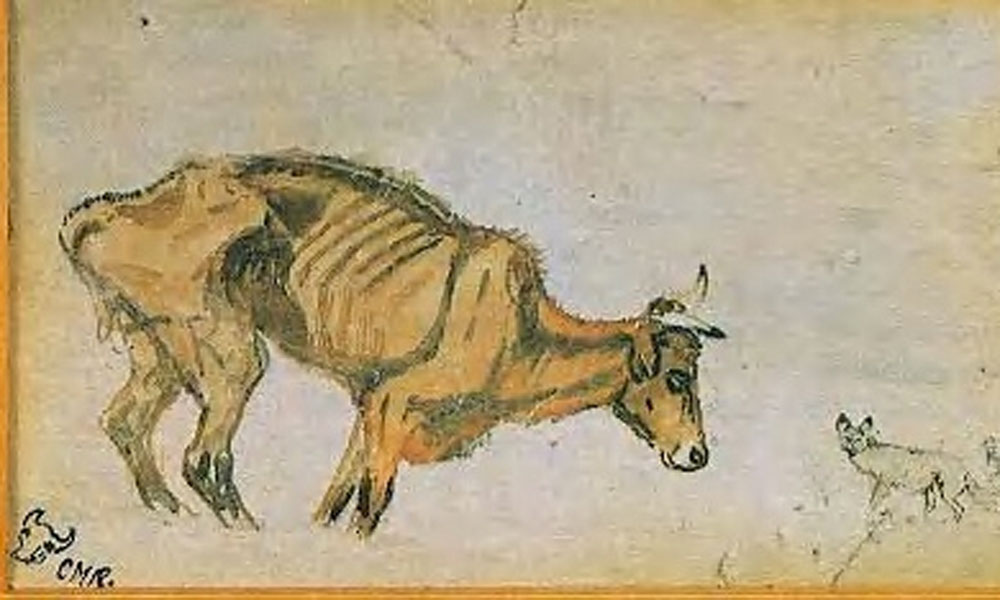 Charlie Russell came to Montana in 1880 at the age of sixteen where he hired out on a sheep ranch. He later went to work for a former trapper Jake Hoover, who owned a ranch in central Montana’s Judith Basin. Over the next few years he worked as a night herder on a number of cow outfits in the area spending his free time becoming an artist. During the brutal winter of 1886-1887 he was working on the O-H ranch in the Judith when the owner wrote to the foreman asking how the cows had weathered the severe winter.

Instead of using words to tell the story the foreman used one of “Kid” Russell’s water colors titled “Waiting for a Chinook.” A chinook was a Blackfoot Indian word meaning “snow-eater,” a warm dry wind that blows down the east side of the Rocky Mountains at intervals and can cause a rapid rise in the temperatures melting the snow and exposing the grass.

The watercolor depicted a gaunt steer under a gray winter sky being stalked by wolves. Someone added the line, “The Last of the 5,000.”

The rancher showed the grim illustration to friends and business acquaintances. It was eventually displayed in the window of a shop in Helena and before long Charlie began to find steady work as an artist and in a few years he would be earning, in his words, “dead man’s wages.”

The rest is history.