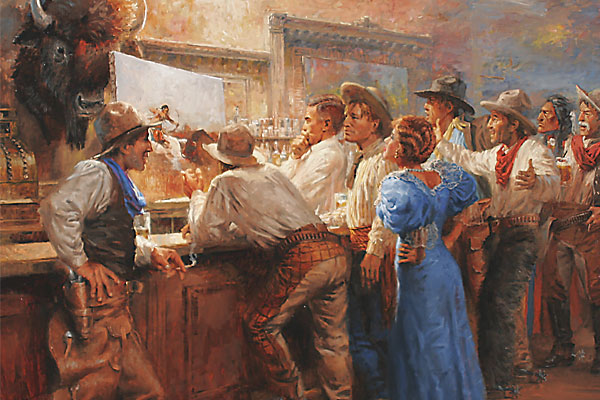 The esteemed cowboy artist did so through the paintbrush of Andy Thomas of Carthage, Missouri, who created “Charlie Russell and His Characters” specifically for this year’s show and auction held in Great Falls, Montana, on March 12-15.

Thomas’s ingenious painting was the talk of the show. First, it was awarded the Jurors’ Best of Show. Then former Denver Broncos quarterback John Elway of Englewood, Colorado, lost the bid to Steve Zabel of Montana Trails Gallery in Bozeman. Zabel put in an $180,000 bid, the highest hammered in at this auction for work by an artist other than Russell since the art auction started in 1969.

Why was it such a hit? Thomas did his homework; his painting is a shining example of how one’s knowledge of Western history can be reflected in contemporary art today.

In the mid-1890s, before Charlie married Nancy, he often sold or traded his paintings to the saloons. A marketing genius, Nancy put a stop to this by promoting her husband’s works to art buyers and critics, so he could just focus on painting and sculpting his creations.

But for a time, a Russell painting could be had while you swigged your drink at the bar. Thomas chose Charlie’s old haunt, the Mint Saloon in Great Falls, as the backdrop.  The artist so often traded paintings for drinks that for many years, the Mint owned the largest collection of Russell art anywhere in Montana. Owner Sid Willis sold his saloon and Russell collection in 1945; Amon G. Carter of Fort Worth eventually bought the collection in 1952 and much of it is housed there today in his namesake museum.

The characters who gather to look at Russell’s creation in Thomas’s painting are not just generic saloon folks. The woman comes from Russell’s watercolor “Just a Little Pleasure.” The Indian can be seen in numerous Russell paintings, including “Joe Kipp’s Trading Post.” The character at the far right end of the bar, sporting a white handlebar moustache, was the shootist in “The Tenderfoot.” All the other cowboys came from various Russell paintings too. And I’m sure you can pick out Russell (hint: he’s by the blue-dressed lady). The only character not represented in a work of art by Russell is the bartender.

The works at this year’s C.M. Russell Art Auction hammered in at nearly $3 million.