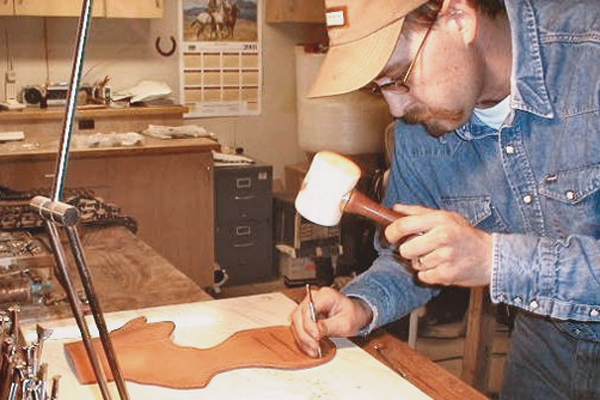 Brett Park, co-owner with his wife Kris Brekke of Circle KB Leatherworks in Redmond, Oregon, has cowboying in his blood.

A native of Oregon, Brett worked on several of the state’s larger ranches before becoming a master farrier and horse trainer in 1991. Kris, on the other hand, is about as far from her husband’s background as she can get. She grew up in Florida and came to Oregon to attend college. Like many other transplants, she fell in love with the West and never left. Luckily for Brett, Kris fell in love with him, too.

After their marriage, the couple expanded Brett’s farrier and horse training business to include custom hunting and pack trips. In 1995, they met Dave Shelgren, a 40-year artisan of gun leather, who
taught them his craft. One year later, Brett and Kris launched Circle KB Leatherworks, concentrating on making custom gun leather for cowboy action shooters and Western re-enactors. They also make Hollywood buscadero rigs and have sold gun belts for use in the musical Annie Get Your Gun and Disney’s The Alamo.

Although customers can visit their Redmond shop, Brett and Kris market most of their goods over the Internet. In addition to gun leather, they also sell a myriad of other Western products, including art prints, china and, one of their best selling items, Chief Brothel Inspector badges.