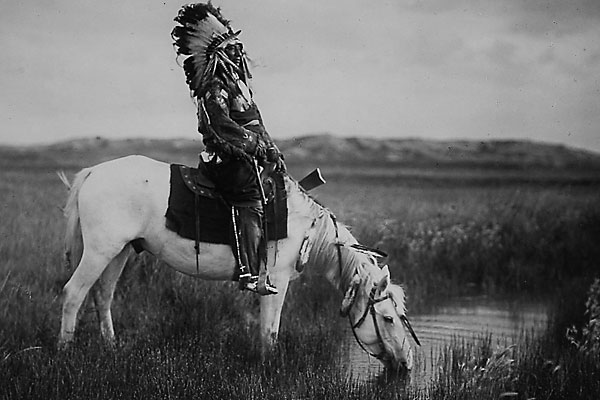 Before the Wild West Show, heck before showman William F. Cody was even born, the Victorian taste for the grotesque was satisfied by circus sideshow acts.

One photographer who snapped portraits of these “freaks” from his Bowery studio in New York City was Charles Eisenmann. This Valentine’s day, a collection of 130 of his photographs kicked off the sale at Swann Auction Galleries in New York.

Circuses began touring America shortly after its founding. Pepin & Breschard first took the circus out west, into the then-uncharted territories of the Appalachians, in 1814, while Adam Forepaugh brought the Wild West under the big top. In fact, the term “horse opera” dates to his Wild West acts in the 1870s. The Nevada State Journal in Reno used the term on August 23, 1877: “Not a few noble red men and a sprinkling of Chinamen completed the throng that lined our streets yesterday—and all because 4 paws big ‘horse opera’ was here. When a circus ceases to draw, then comes the millennium, sure.” Cody wouldn’t take his show on the road until 1883.

One photograph included in the Swann sale depicts a legless acrobat, Eli Bowen. Born in Ohio in 1844, Bowen, from the age of 13 and on, performed in circus sideshows, including those owned by Forepaugh and the Sells Brothers, as well as dime museums of curiosities, such as P.T. Barnum’s. While touring with Thayer & Noyes Great Circus in 1867, Bowen was on exhibition at Norman’s Museum, which incorrectly billed him as the “wonderful man with feet and no legs from the swamps of Texas.” Eisenmann did photograph “giant” cowboys from Texas, but those images (see example) were not included in this sale.

Bowen died from pleurisy at 82 on May 4, 1924, while staying with the Dreamland Circus sideshow in Coney Island. His obituary stated that “Captain Bowen in his youth had led a storied career…wherever sideshow tarpaulin had flapped the captain was known.”