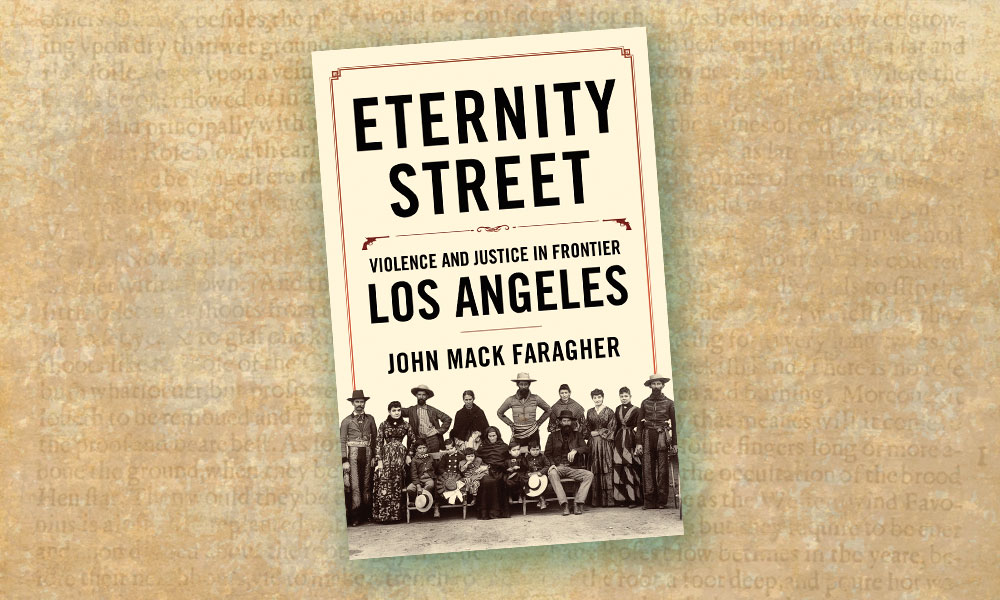 Los Angeles is my hometown. As a writer and historian for many years, I have come to believe that L.A. is “the West’s most Western city.” Yale University Historian John Mack Faragher’s groundbreaking research and conclusions in Eternity Street: Violence and Justice in Frontier Los Angeles (W.W. Norton, $35) confirms the idea.

Growing up and going to school in North Hollywood near the film and television studios from 1964 to 1981, I was acutely aware of the real and imagined history of the city, California and the West—Old and Modern—that television depicted—and reported—daily. From Gunsmoke to Adam-12, from Death Valley Days to The Rockford Files, violence in the West and Los Angeles was imagined and re-imagined on the streets and backlots near my home. On the nightly news in L.A., I had a front-row seat to real violence in my city and state,  including the kidnapping of Patty Hearst, and the Los Angeles Police Department’s S.W.A.T unit trapping and killing members of the Symbionese Liberation Army live on local TV. The mythmakers who found Southern California the perfect location to re-create nearly every historical era and location in the United States for cinema and TV audiences, rarely if ever tapped into L.A.’s very real, and very violent 19th-century history. Even in the classroom, California history seemed to skip from the Mission Era to the Watts Riots.

One of our country’s preeminent historians of the West, Faragher’s firsthand experience living in Los Angeles in the 1950s and 1960s has provided him a unique perspective. Born in Phoenix, he grew up in L.A. a generation before me, graduating from college in 1967. He understands his adopted hometown, maybe better than most, and in Eternity Street reveals the roots of more than a century of de facto segregation, racism and poverty that by the time he was a teenager in the 1960s, had ravaged the soul of the City of Angels. As the Howard R. Lamar Professor of History succinctly writes, “Numerous statistical studies demonstrate that since the nineteenth century all the states with homicide rates higher than the national means were located in the West or the South. Los Angeles, settled by migrants from Mexico and the American South, plays an important role in this history.”

Extremely well-researched, with detailed end-notes, Faragher’s history of Los Angeles from the 1850s to the 1880s reveals a Western city as violently plagued by corruption, murder, lynching, racism, mob rule and riots as any urban area and—based on the per capita population—maybe more so than any other metropolitan district in the country at the time. Readers of Eternity Street will recognize famous locations and place names of L.A. (like Pico, Sepulveda, Banning and Alvarado) in the pages of Faragher’s Eternity Street, as well as many that have been forgotten by time or infamy. From Chinatown to the original Mission Plaza, from the San Gabriel Mission to San Juan Capistrano, Faragher’s 19th-century Southern California is a wide-open frontier region of urban treachery, racial unrest, land barons and business entrepreneurs jostling for economic control of a city ruled on the edge of the law.

Whether you agree with my idea that Los Angeles is the West’s most Western City or not, I promise that if you read Professor Faragher’s Eternity Street you will be enlightened to discover the violent story of the West—real and imagined—today’s and yesterday’s—begins and ends in Los Angeles, even if Hollywood has never made a film or television series about the City of Angels’ notorious frontier history.