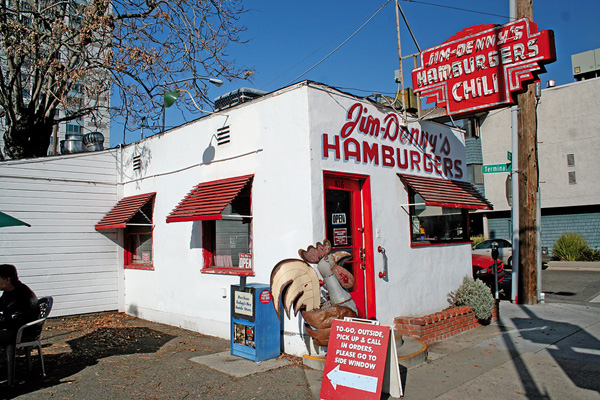 In a country that is quickly becoming McDonald’s-ized, it’s comforting—and fattening—to find institutions across the West serving grub the way it should be served. So we wipe the grease off our fingers and salute these masters of chow who cherish good eats and have never heard of the word cholesterol.

Lost Maples Cafe (Utopia, TX): Located in one of Texas’s most picturesque areas, the Lost Maples Cafe is known for solid comfort food, Texas-style. Built in the early 1900s, the building has served as many things, even a classroom. Folks still get an education here in good eats, thanks to owners Rusty and Tacy Redden, and their pies, pies, pies!

Cotham’s Mercantile (Scott, AR): Country cooking makes strange bedfellows. Bill Clinton dined here. So did George W. Bush. (Not at the same time.) About a half hour southeast of Little Rock, the mercantile opened in 1917 and started serving lunch in 1984. Get here early. The Hubcap Burger is dynamite.

The Diner (Norman, OK): No frills in this Main Street diner’s name. No frills in the furnishing (vinyl and Formica). No frills when it comes to the grub, either. The building’s just over a century old, and owner Claire Amspacher knows what Okies like to eat. Breakfast is great, and the award-winning red chili always hits the spot.

Norma’s Cafe (Dallas, TX): Located in Big D’s Oak Cliff neighborhood since 1956, this classic diner certainly inspired Ed Murph. He ate here as a kid, then bought the place more than three decades ago. You can’t go wrong with a Blue Plate Special. Just make sure that you save room for a Mile-High Cream Pie.

600 Cafe (Miles City, MT): Family-owned-and-operated since 1946, the 600 Cafe dishes up homemade specials, hand-cut steaks, you name it. In the spirit of Western hospitality, the staff fed 480 patrons a free Christmas dinner last year. They hope to serve even more this Christmas.

Pete’s Kitchen (Denver, CO): Pete Contos came from Greece in 1956, working his way up from dishwasher to the owner of a chain of Pete’s Restaurants in the Mile High City. No knocking Pete’s other restaurants, but grease is the word at Pete’s Kitchen. It’s perfect for people watching when the bars close, but the food is filling anytime.

Jim-Denny’s (Sacramento, CA): There are only 10 seats at the counter, and chances are they’ll be taken when you squeeze inside. The restaurant opened in 1934, and, with close to 80 years of seasoning on that grill, the food is mouthwateringly good.

Bruce’s Bar (Severance, CO): This place is a dump. But this dump serves the best Rocky Mountain Oysters in the world. After turning the Severance Recreation Hall into a bar in 1957, Bruce Ruth began serving delicious oysters two years later. If you’re squeamish about putting beef testicles in your mouth, Friday’s special is fried fish and Saturday’s, prime rib.

Bobo’s Restaurant (Tucson, AZ): It’s small, crowded, noisy, and you won’t find anything expensive or fancy on the menu (well, unless you consider a Reuben omelet or a banana/candied-pecan pancake fancy). Just remember: Bobo’s closes at 2 p.m.

Invasion Bar (Kaycee, WY): It’s across the street from the Hoofprints of the Past Museum and a few blocks north from where Nate Champion was killed during the Johnson County War. The last time I dropped in, a Gunsmoke episode was playing on the TV. Burger … beer … Matt Dillon. That’s hard to top.