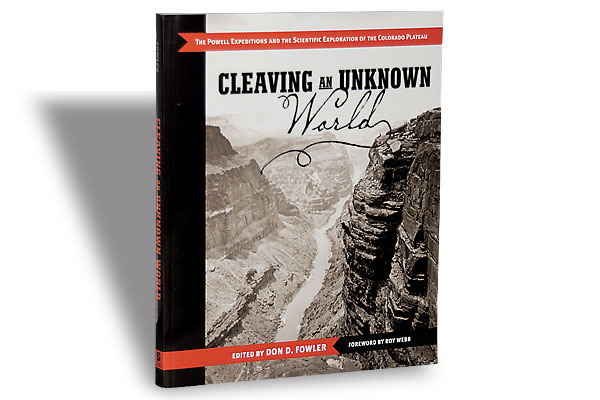 By 1869, Lewis & Clark, trappers, U.S. Army surveyors and pioneer emigrants had pretty much explored most of the continental United States, but with one notable exception: the canyons of the Green and Colorado Rivers.

Sure, trappers had ventured into these canyons, most notably William Ashley on the upper Green in 1825, but he shared his tales of adventures around the campfire. To most folks at the time, the lack of published accounts enshrined these canyons as places of great mystery.

In the introduction for Cleaving an Unknown World (University of Utah Press, $24.95), Roy Webb writes that Powell’s 1869 and 1871 expeditions down these rivers “are among the most significant, stirring, and well documented in American history.”

That belief is why the University of Utah Press dedicated itself to publishing a total of four volumes of out-of-print journals, letters, maps, photos and other documents from Powell’s expeditions; this is the final volume. Although biographies, magazine articles and even a feature film (Ten Who Dared) have helped to make Powell’s expeditions among the best known in the annals of North American exploration, these volumes provide firsthand access to the explorer, through the journals and writings of members of his two expeditions.

This final volume gathers together documents that are not easily obtained by today’s readers, such as the witty “Lost Journal of John Colton Sumner” and, my personal favorite, Jack Hillers’s diary, recorded during 1871-75. As editor Don D. Fowler explains in the book, Hillers chanced upon Powell in 1871 Salt Lake City, Utah, where the major was making preparations for a second boat trip down the Green and Colorado Rivers. Powell liked the teamster and offered him the boatman’s job; Hillers accepted. Thus marked the start of Hillers’s photographic career, one that would see him become the chief photographer for Powell’s survey of the Rocky Mountains, among other illustrious jobs. His photographs, and those taken by others, all deftly serve to illustrate the accounts shared on these pages.