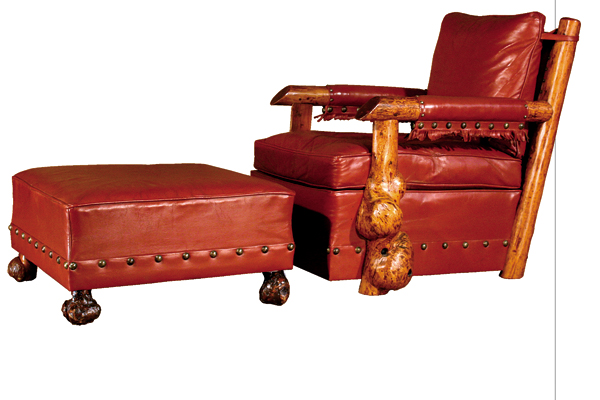 Ever since the landmark sale of Molesworth furniture at Christie’s New York in 1995, collectors have been on the lookout for original pieces that they can snatch up.

Christie’s sold 318 lots from Molesworth’s “Old Lodge” for $2.58 million in bids. The collection was the property of Dr. & Mrs. George S. Bayoud, and it was originally owned by George Sumers, who purchased the furniture for his Cardiff Ranch in Glenwood Springs, Colorado. “Without a doubt, the Old Lodge … was the largest and grandest commission Molesworth ever accomplished. Shoshone Furniture Company was involved from the start of construction,” writes Terry Winchell in Molesworth: The Pioneer of Western Design, adding that the furniture from the Old Lodge has such a high value because Molesworth never reused most of the styles.

Born in Kansas in 1890, Molesworth originally had aspirations to be an artist and was trained at the Art Institute of Chicago during the Arts and Crafts furniture movement. He then helped out at his family ranch in Forsyth, Montana, and served in the Marine Corps during WW II. After his service, he eventually became the manager of Rowe Furniture Company in Billings from 1924-31. That final year, he gathered up his family and moved to Cody so he could start his own furniture business: Shoshone Furniture Company. When Moses Annenberg commissioned Molesworth to furnish his Ranch A property in the 1930s, Molesworth’s future was secured. By 1936, Molesworth was creating the famous Western and wildlife silhouettes for which the company became famous. Much of Molesworth’s success though is attributed to his knack in bringing artisans to Cody and training them to perform up to the skill he demanded.

By 1977, the year he died, his work had fallen out of fashion. The Christie’s sale, though, revived interest in Molesworth furniture, and the June sale at Brian Lebel’s Cody Old West Show & Auction in Cody, Wyoming, confirmed that people are still clamoring to get their hands on an original. The sale of 24 lots hammered in at $250,000. The total auction sale brought in $1.725 million in bids.