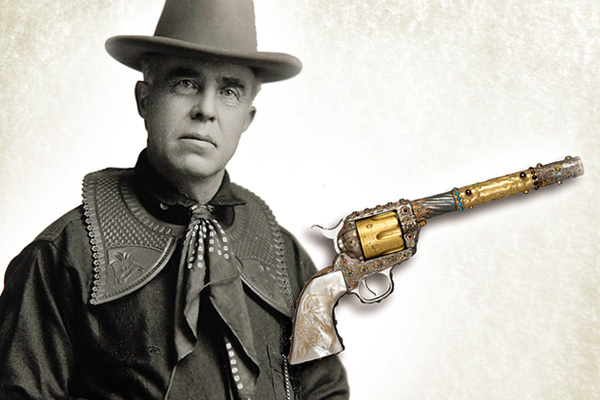 “God created men; Col. Colt made them equal.” So goes the oft-repeated quote about Col. Samuel Colt and his legendary firearms.

Yet Col. Colt made more than the weapons that became the great “Equalizers.” This inventive manufacturing genius not only produced some of the world’s most revolutionary revolvers in his time—an era that was crucial in the development and expansion of this country—his factory also turned out some of the most practical tools that became key to the settlement of the American West. More often than not, the Colt revolver was the handgun of choice on the frontier, from the time of its first introduction to Westerners in the early 1840s through the closing decade of the 19th century.

The Autry National Center’s collection of Colt revolvers and related artifacts—considered to be one of the finest in the world—is on permanent display in the Greg Martin Colt Gallery…and what an array of Colts it is!

The exhibit, “The Colt Revolver in the American West,” will be changing from time to time, rotating the vast and continually-growing collection of Colts housed at the Autry. At present, 100 revolvers are exhibited—50 of which are the popular Single Action Army revolvers.

The exhibit also displays a small assortment of Colt longarms, such as seldom-seen weapons like the rare Colt Paterson shotgun and an 1855 Colt Root revolving rifle. The revolvers shown include some fascinating examples like cutaway models of Colt percussion revolvers (showing the interior workings), a prototype Colt revolver that dates from around 1835, a cased Texas Paterson, a Walker Colt and an assortment of some of the most opulent Colts existent.

Also included in the show are some personal mementos from Col. Colt and his family, like Colt’s painted ancestral coat of arms, made by Elizabeth Colt Clapp; a sterling silver, hand engraved and embossed presentation pitcher presented to Colt’s son, Caldwell Hart Colt in 1879; and more.

If you find yourself in the Los Angeles area, be sure to check out the Autry National Center’s Greg Martin Colt Gallery. It’s part of the overall museum, which in itself is well worth a visit. A walk through the Autry is like a time-travel trip back to the Old West!