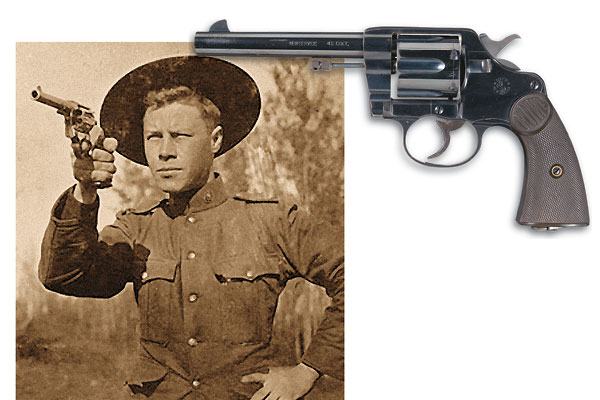 The Old West may have been gone by the early 1900s, but the West was still a place where a man needed to be “well heeled.”

It was the era of the last hurrah for Butch Cassidy’s Wild Bunch. The Arizona Rangers were formed to uphold Arizona Territory’s laws. The Mexican Revolution of 1910 kept America’s Southwestern border ablaze. Gold strikes fueled the Yukon. These are just some of the incidents that made defensive arming as important then as it was during the heyday of the frontier.

In response to the growing market for a reliable and powerful double-action revolver, Colt had been working on redesigning its earlier double-action revolvers. Its 1877 and 1878 models suffered from weak and complicated internal mechanisms. Colt’s swing-out cylinder versions, like the Model 1889 or any of the New Model Army and Navy double-action models, needed a boost in power as they were chambered for cartridges like the underpowered blackpowder .38 Long Colt cartridge.

In 1898, Colt introduced its “New Service” double-action revolver in a variety of powerful cartridges, including .45 Colt, .44-40,

.38-40, .450 Boxer, .455 Eley and .476 Eley, with the intention of it being accepted as the standard sidearm of the U.S. military. Colt had been the major supplier of such firearms for the past five decades.

Although Colt did sell about half of the approximately 356,000 New Service models to the U.S. government, with production running from 1898 to 1943, the rest went to civilian markets. Many of those sales were made to official agencies like the Royal Canadian Mounted Police, the Los Angeles Police Department and the U.S. Border Patrol.

Standard barrel lengths of these mirror blued (with case-colored hammers) or nickel-plated six-guns ran from two inches to 7½ inches, with 4½-inch, 5½-inch and 7½–inch tubes being the most common. A nut-mounted lanyard ring was standard. Up until 1928, grips were checkered black hard rubber with the Colt oval. After that, checkered walnut, with the inset Colt medallion, was used.

The New Service Colts found favor with a number of Westerners besides the Mounties, including Oklahoma bandit Henry Starr, Buffalo Bill’s Wild West Show sharpshooter Johnny Baker and silent cowboy actors Jack Hoxie and William S. Hart. The addition of the 1873 Colt’s ejector housing allowed it to duplicate the single-action Peacemaker for fast firing scenes in many movies. The six-shooter saw lots of use in the early 20th century’s real and reel West!