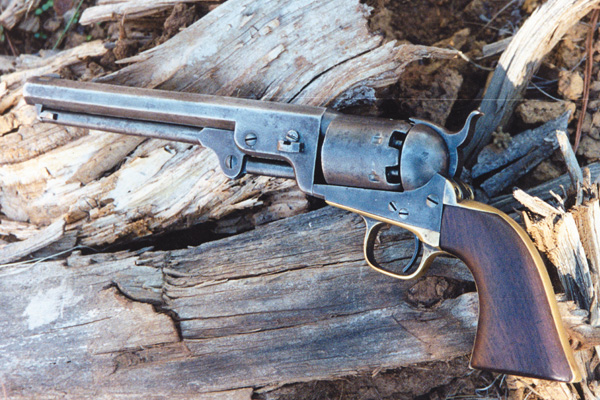 If ever a gun were to be considered a classic, certainly the 1851 Navy Colt would rate at the top of anyone’s list.

This caplock six-shooter may be the first truly practical revolver, since the Colts that preceded it were either lacking in ergonomics and design refinements, or were simply too big and cumbersome. For its day, the ’51 Navy represented the peak of firearms technology: light weight, excellent balance, natural pointing and handling characteristics, and man-stopping power were all found in Colt’s one-hand gun.

During its 23 years of production, 257,348 Navies were turned out by Colt facilities in Hartford, Connecticut, and London, England. The federal government purchased only 3,005 of the 71⁄2-inch, octagon barreled, American-made revolvers during the Civil War. A great many more were bought privately and used during the conflict as the streamlined cap-and-ball revolver was highly valued by Confederate soldiers fortunate enough to capture one from their Northern foes. The Confederacy actually produced copies of the Colt for its troops, and an engraved Colt ’51 Navy was the personal sidearm of none other than Confederate Gen. Robert E. Lee.

Actually introduced in 1850 and produced until 1873, the Model 1851 Navy Colt reigned as a favorite fighting handgun among know-ledgeable pistoleers. Even though Colt introduced the Single Action Army revolver in the Navy model’s final year of production, many Navies were converted to take the then-new metallic car-tridges, giving them a longer practical life.

Easily dubbed the “Peacemaker” of the percussion era, this six-gun was the choice sidearm of such historical figures as James Butler “Wild Bill” Hickok, often called the “Prince of Pistoleers,” as well as many of his gun-savvy contemporaries, such as John Wesley Hardin, the James-Younger Gang, the Pinkertons, many U.S. dragoons of the pre-Civil War years, a number of Pawnee scouts and frontiersman Maj. Frank North.

In its early years, the Navy Colt was prized by Argonauts flocking to the California goldfields, and later, it saw use in the Australian Outback. The Navy was also packed by government forces in Austria, Canada and England. Navy Colts were highly used during the Crimean War (1854-56): a number of British sailors were issued .36 caliber Colts, and at the Battle of Balaklava, Navy Colts thundered into the valley of death during Great Britain’s ill-fated, but legendary, Charge of the Light Brigade.

Even in modern times, the Navy’s fame lives on. Perhaps no greater testimony to the historical status of this mid-19th-century revolver can be given than when in the late 1950s, modern black powder pioneer Val Forgett selected a Confederate copy of the 1851 Navy to introduce the first replica Civil War-type firearms for 20th-century shooters. Today, the ’51 Navy Colt is perhaps the most replicated black powder handgun in the world. Among firearms enthusiasts, it is considered by many to be the archetypical percussion revolver.