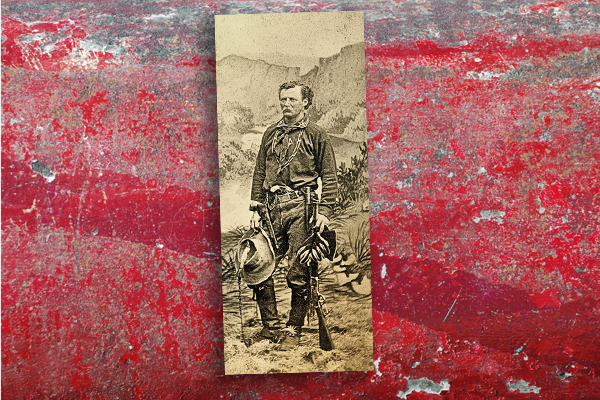 On September 17th, 1868 Colonel Sandy Forsythe’s band of scouts found themselves surrounded by several hundred Cheyenne Dog Soldiers led chief Roman Nose, on the Arikaree fork of the Republican River in eastern Colorado.  Casualties were heavy Colonel Forsythe legs were both broken, Lt. Frederick Beecher’s back was broken and he suffered three bullet wounds. Dr. John Mooers had suffered a fatal head wound and more than half the men were either wounded or dead.  Food rations were running low. Forsythe asked for two volunteers to walk a hundred and twenty miles to Fort Wallace, Kansas for help. All the able men volunteered but he chose 19-year-old Jack Stilwell and an old scout named Pete Trudeau to make the forced march through enemy lines.

The two cut off the tops of their boots and made moccasins so the Cheyenne would have a hard time picking up their trail. Wrapping themselves in saddle blankets they hit the trail. The next morning they hid in a ravine within sight of the Cheyenne camp.

On the fourth day they found themselves on an open plain with no cover when they saw a Cheyenne war party approaching. Frantically searching for cover they came upon the carcasses of two dead buffalo lying in some tall grass. The two scouts crawled inside the dead animals and waited anxiously. Suddenly Jack heard a hissing sound. A big rattlesnake slithered out of the skeleton and coiled about a foot from his head.

Young Stilwell just happened to have a chaw of tobacco in his mouth and before the snake could strike; with all the aplomb of a veteran muleskinner, Jack spat a juicy wad that hit that snake right in the eyes.  That rattler backed off and make a hasty retreat into the grass.

The Cheyenne, unaware of what just happened, turned and rode off.

Forty-eight hours later the two scouts arrived at Ft. Wallace. Trudeau died a few days later from the perilous journey but when the relief party rode out Jack Stilwell, although he was plumb worn out from the ordeal, was riding in the lead. He would go on to become one of the great scouts on the plains.