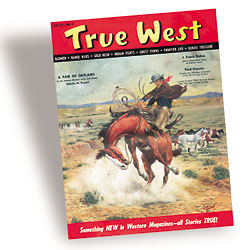 TRUE WEST relates our history back to the present day, to show readers the important role our heritage plays in keeping the spirit of the West alive during our everyday travels and adventures out West.

Launched in 1953 by the legendary Joe “Hosstail” Small in Austin, Texas, True West is a popular history publication with a loyal, core readership, and the oldest, continuously published Western Americana publication in the world. Thanks to the proliferation of TV Westerns in the late 1950s and early 1960s, the magazine enjoyed broad circulation (200,000+ newsstand sales). But, as the market and his health started to decline, Joe Small sold out in 1974 and over the next decade, the magazine bounced around the Midwest, finally settling in Stillwater, Oklahoma. Unfortunately, the Oklahoma owners did not have the capital to stay current with the changing times and the magazine began to lose significant market share, as newer, slicker titles such as Cowboys & Indians and American Cowboy came into the marketplace. By mid-1999, the publication, along with three other titles, was for sale, and the current owners came to the rescue. True West Publishing (including assets and trademarked names of True West, Old West, Frontier Times) moved to Cave Creek, Arizona, in October 1999.

In 2003, the magazine celebrated its 50th anniversary. The year also marked the incorporation of True West Publishing and an increase in the magazine’s frequency to 10 issues. True West now also publishes an annual shopping guide called the Best of the West Source Book.

This amazing, little ol’ magazine begins its second half century with even more milestones:

The good news is, we aren’t done yet! True West magazine is planning many exciting new projects, which will make your biscuits rise! So stick around and see what else we cook up.