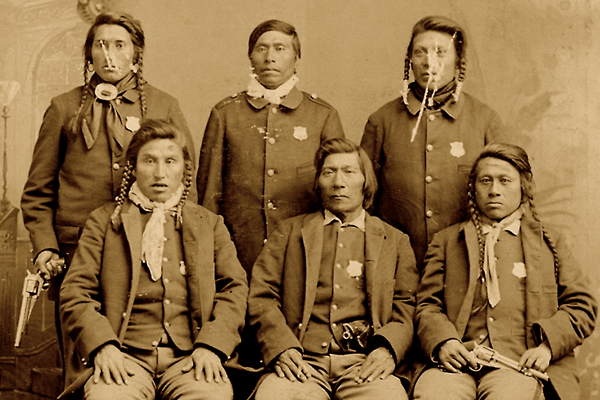 Little brother Jesse may have preferred Smith & Wesson’s 1875 Schofield .45, but Frank James endorsed the Remington, calling it “the hardest and surest shooting pistol made.”

When Frank surrendered in 1882, months after Jesse had been killed, he was armed with a pair of 1875 Remingtons chambered for .44-40. Frank was acquitted of murder charges from a bank holdup in Gallatin, Missouri; later on, he partnered up with another outlaw, Cole Younger, to put on a wild west show.

If not for Colt’s immediate success with its 1873 Single Action Army (SAA) revolver, rival handgun manufacturer E. Remington & Sons may never have issued its “clone” of the metallic cartridge, Army-type holster revolver. The Ilion, New York, firm introduced its Peacemaker look-alike that Frank so prized, the “New Model 1875” or “No. 3 Revolver,” in the fall of that year.

In designing its 1875 model, Remington cleverly combined the lines of its sturdy cap-and-ball Army revolver with those of the 1873 Colt SAA. The final result was a handsome marriage of the two handguns. About the only real differences between them were the 1875 model’s webbed under-barrel assembly and the longer distance from the back of the frame/hammer area to the grip. Subtler departures from the Colt: an ejector housing placed directly beneath the barrel, an ejector head and rod operated from the right side of the barrel and a longer cylinder base pin retaining screw located toward the front of the ejector housing.

Initially chambered for the .44 Remington, a pro-prietary centerfire cartridge, production guns were later produced in .44-40, with a handful made in .45 Colt. Although the 1875 Army was offered as standard with 71⁄2-inch round barrels, a few hundred left the factory with 53⁄4-inch tubes. Standard finish was either full nickel plating or blued with a color case hardened loading gate and hammer. Two-piece walnut grips were regular fare, although ivory or pearl stocks were also offered at extra cost.

At the onset of the 1875 model’s run, sales were brisk and the gun seemed destined to enjoy a huge success. Within the first year of production, the Egyptian government had ordered 10,000 guns. As the years rolled on, however, sales lagged and production fell far short of the company’s expectations. Though their 1875 model was submitted for various military trials, officers serving on the boards saw no advantage in Remington’s offering over the already-issued 1873 Colt, thus army contracts were never secured. The Republic of Mexico ordered 1,000 revolvers, and in 1883, Remington sold several hundred nickel-plated ’75s to the U.S. government for issuance to the various Indian police agencies in reservations on the frontier.

Despite its “Peacemaker” image, the 1875 Remington never became a serious rival to the Colt; production finally stopped in 1889, giving way to the handsome 1888 and 1890 models, which are basically ’75 models with the webbed under-barrel assembly cut away. Manufacture of those models finally ceased in 1894, marking the end of Remington’s bid for a spot in the large caliber revolver marketplace.

Frank James may have thumbed his nose at Colt’s Peacemaker, but unfortunately for E. Remington & Sons, the rest of the nation stayed on the Colt bandwagon.