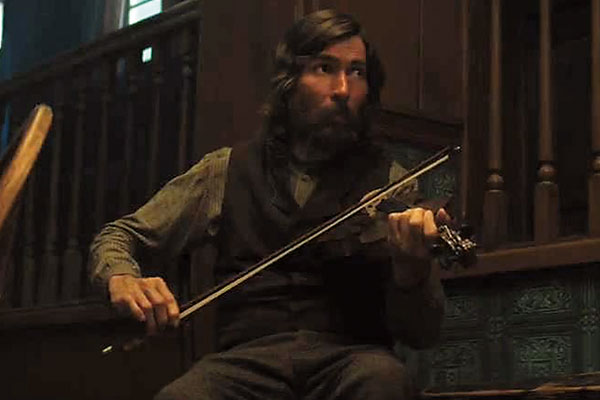 Rex Rideout is a multi-instrumentalist who travels the West with groups of varying sizes, playing historical music from the 19th century.

In Cowboys & Aliens, he can be seen as the solo fiddle player in the saloon during an altercation between Jake Lonergan (Daniel Craig) and some local authorities.

How did you get involved in the film?

Well, Paul Hutton was brought aboard as a historical consultant. When they asked him if he could think of a fiddle player they could use for the film, he thought of me (see p. 33).

Did you have a hand in the choice of music used in the scene?

They requested me to do a traditional Civil War-era tune called “Lorena” that was also used throughout the John Ford/John Wayne film The Searchers. It was Jon Favreau’s tip of the hat to the John Ford movie, which he watched, while prepping for the movie, with Steven Spielberg.

What I did was, I recorded it on set with their sound man, Edwardo Santiago, and he had me play it several times while he recorded it different ways, so he’d have choices. Then he had me wired during the scene. But what your hear in the scene is me.

“Lorena” is a melancholy theme, isn’t it?

Well, in my scene, our hero (Craig) comes into the saloon, and the authorities come in to arrest him, and there’s a fight there. I’m playing “Lorena,” and the barkeep, who’s upset because he’s being hassled by the cowboys, turns and hollers at me, “Why don’t you play something a little more cheerful?”

So what do you do?

The plan was, I was only going to play the one tune, but I asked Favreau, “Why don’t I go ahead and play something more upbeat right there?” He asked me what I had in mind, and I jumped into the Star Wars “Cantina” theme. [Laughs.]

Favreau asked, “What’s that?” I told him, and he turned to a guy standing next to him and asked, “Did you get that?” The guy said, “Yeah.”  He was one of the Star Wars writers. [Laughs.]

But I said, “I have several tunes that would be era-appropriate, and I think ‘Rye Whiskey’ might work best,” and that’s where I took it.

You told me this was your first movie. What was it like being on the set?

One thing that impressed me was how correct everything was. When I mentioned that to Favreau, he told me he really wanted everybody to get accustomed to the authentic feeling of the 1870s West. That way, when the aliens hit, the shock value would be even greater.

The one thing that threw me off was the sound a “Yellow Boy” 1866 Winchester made when it hit a table. It didn’t sound the way that rifle would sound. So I took a look at it. It was rubber. Turns out they have several different kinds, for different scenes.

Did you get to meet the headliners?

Harrison Ford was gone when I was there; he’d left the set to get married to Calista Flockhart! But Daniel Craig was there the whole time. I noticed he liked to mix it up and hang around. When the other actors would go to their trailers, he’d stay with the crew and extras—it seemed like movies are still fun for him.

I had expected when I arrived that people would be tense, but they were relaxed and good to each other, from Favreau all the way down. I really appreciated that.  Good folks.  And they treated me well—in fact, they said I was a VIP, whatever that means. They gave me a room with a star on it! [Laughs.]

If the movie does well, would you come back in the next one?

Well I was told they were set for two sequels, so….

Are you going to be known from now on as the fiddler in Cowboys & Aliens?

I sure wouldn’t mind!