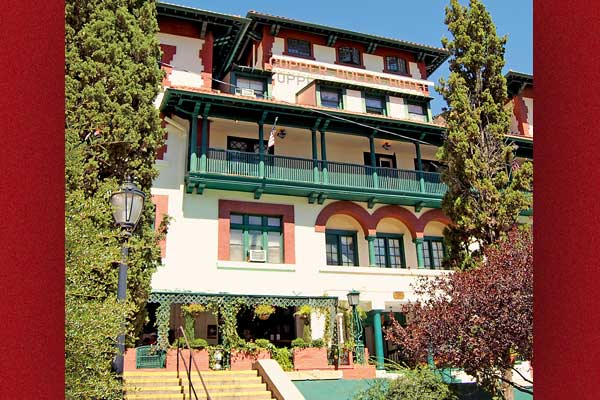 Arizona’s oldest continuously operated hotel, built by the Phelps Dodge Mining Company as a place where dignitaries and investors could relax in luxury, opened its doors in 1902.

“It’s one of the true landmarks of Arizona,” says Dan Finck,

who owns the hotel with his wife, Connie, and his in-laws Kevin and Kathy Feil. “People come here to go back in time, relax and
get away.”

The Copper Queen was one of the fanciest hotels in the West in its time, sporting mosaic tile from Italy throughout the first floor, a tiger oak front desk and—supposedly—a cathedral ceiling fitted with Tiffany glass.

Today, the hotel offers up 48 rooms furnished with Victorian charm. A bed and breakfast acquired by the hotel in 2006 added four guest rooms to the total.

The owners have fun with their guests by offering a “ghost hunt” every Thursday night. Guests seek out the hotel’s spirits such as a former lady of the evening who allegedly hanged herself in the hall outside Room 315.

More corporeal guests include actor John Wayne, who, after enjoying himself in the saloon, frequently spent the night in the room that now bears his name. Arizona author J.A. Jance, who often mentions the Copper Queen in her books, also has a room named after her. Other notable past guests include Harry Houdini, Marlon Brando and Lee Marvin.

The Copper Queen Saloon’s patio is a fine place to take in the sweeping views of downtown while you enjoy a Bisbee Blue Margarita or a cold glass of Dave’s Electric beer. Be sure to check out the saloon’s painting of 19th-century English actress Lillie Langtry.