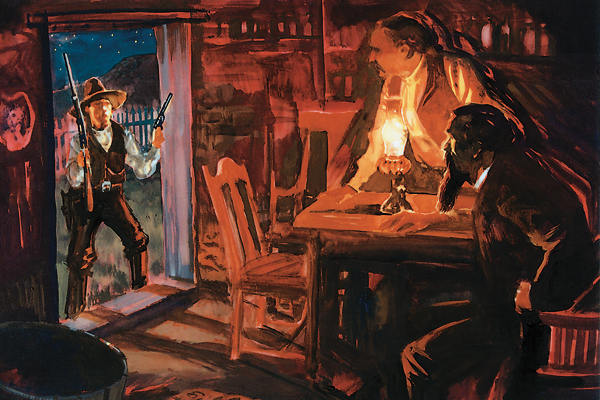 Those two things stand out in the life of this politician, lawyer, musician, artist, diplomat and soldier. In fact, the two are often seen as conflicting issues. Face it, most people think that Wallace was a lousy governor of the New Mexico Territory, because while he was there, he was writing Ben-Hur, the book that made him famous.

The truth is more complicated.

And the truth can be found in Wallace’s papers, most of which are in his home state of Indiana. The man was a compulsive writer who kept almost all of his old letters, documents, diaries and notes. The total number may be in the millions. His New Mexico papers, covering just 21?2 years between 1878 and 1881, include tens of thousands of items.

And only a handful mentions Ben-Hur.

The story began about 130 years ago, in 1873, when Wallace started developing the idea for his classic novel. After three years of research and note taking, he took pen to paper. By the middle of 1878, Ben-Hur was three-fourths of the way done. Wallace followed a pattern he’d set with his first book, 1873’s The Fair God: perform regular duties during the day, then write late at night or during other free time. No wonder it took him 24 years to finish The Fair God.

Ben-Hur went much faster, mostly because Wallace didn’t have much to do in the 1870s. He ran a law firm—but he hated the practice of law. So he did just enough to keep the wolves from his door and buried himself in writing. It’s not that he didn’t want a job; he’d been seeking a federal diplomatic appointment for years.  But nothing materialized.

In the spring and early summer of 1878, the federal government investigated alleged corruption in the New Mexico Territory, with a special focus on Gov. Samuel Axtell. As a result, Axtell was axed. Enter Lew Wallace. President Rutherford B. Hayes owed him some political chits, but he also considered Wallace to be something of an arrogant troublemaker (lots of people did, but that’s another story). So the job happened to be in far away Santa Fe.

Wallace’s work actually started on September 13, 1878, when he went to Washington, D.C., for voluntary briefings on New Mexico. He then traveled to Santa Fe, arriving on September 30. By that time, most of the key incidents of the Lincoln County War—the murder of John Tunstall, the assassination of Sheriff William Brady, the Blazer’s Mill gunfight and the Battle of Lincoln—were already history. So for his first six weeks in New Mexico, Wallace focused on keeping the peace. He met with many of the principals, sought military assistance from Washington, issued proclamations and demanded that the territory’s lax legal system take action against outlaws on both sides in the war. By mid-November, Wallace began telling people he had accomplished his mission.

For the next three months, a nervous quiet reigned.  Wallace continued his official duties, but it’s likely he used the lull as an opportunity to work on Ben-Hur. At least some Wallace observers believe that he finished the first draft of the novel during this time.

The “idyll” was shattered on February 18, 1879, with yet another killing in Lincoln. The murder threatened to restart the war. Wallace took stock of the situation, and then headed for Lincoln on March 2.  Ben-Hur again took a back seat.

Wallace spent the next six weeks at the hot spot, ordering the grand jury indictments and arrests of a number of badmen on both sides. He met with Billy the Kid on March 17, setting up a deal in which the outlaw would testify in several court proceedings in exchange for a full pardon. Wallace also spearheaded the attempt to get Fort Stanton commander Nathan Dudley—an ally of the corrupt judges, lawyers, politicians and bankers who basically ran the territory—punished for his role in the war. Nothing came of it. To make matters worse, dozens of the criminal indictments were thrown out of court. And the Kid walked out on his agreement with Wallace when it appeared the pardon wouldn’t stand.

Wallace went back to Santa Fe in mid-April and turned his attention to fighting Indians as the Apaches conducted hit-and-run attacks in New Mexico and Arizona. He also helped push through a bond issue that speeded up the process of bringing the railroad to the territorial capital (it arrived in February 1880). And Wallace began a project that would have lasting importance: recovering, restoring, cataloging and archiving New Mexico’s important records and documents.

By October, the second draft of Ben-Hur was complete and Wallace had begun copying the manuscript in purple ink, a traditional Christian color signifying the conflicting concepts of royalty and suffering.

By his own account, Wallace was a man with a short attention span, and he was losing interest in New Mexico. The fact that several of his efforts had failed was a contributing factor. Then Sue, his homesick wife, moved back to Indiana. Mix those things together and you had a man who was ready to don some traveling shoes.

But the governor had one more burst of energy left. The first quarter of 1880 turned out to be Lew Wallace’s last stand in New Mexico.

The biennial legislative session started January 4, and Wallace brought a full load of proposals to the lawmakers. He offered a slate of handpicked nominees for the territorial offices, including noted lawyer Albert Fountain for Third District attorney. But the legislature rejected almost all of Wallace’s initiatives and refused to approve any of the nominations. When the session closed in February, he had pretty much run up the white flag.

In March 1880, Wallace took the train to Indiana, picked up his wife and headed East. The Ben-Hur manuscript was done; they delivered it to Harper’s Publishing in New York City. The publisher was nervous that a fictional story featuring Christ would be torn apart by critics and the general public. The manuscript would have to be closely read and analyzed before a deal would be struck.

The Wallaces then traveled to the nation’s capital where the governor held meetings with various federal officials. The talks were perfunctory and nonproductive. The same could be said of Wallace’s New Mexico work.

In September, Wallace took two months off to campaign for Republican presidential nominee James Garfield, a colleague during the Civil War. The travel schedule was busy but allowed Wallace time to visit with his family in Crawfordsville, Indiana.

Harper’s picked up Ben-Hur and published it in November. Within weeks, the author received letters of congrat-ulation. By March 1881, he tendered his resignation to the new President Garfield and declined the offer of reappointment. Former Louisiana Congressman Lionel Sheldon was picked as his successor. At this point, Wallace was looking to the future. He wouldn’t have long to wait.

It’s hard to imagine a new chief executive having the time to delve into fiction, let alone a major tome, but Garfield read Ben-Hur in early 1881. Simply put, he was blown away. He offered the governor a position near the Holy Land, the ambassadorship to Turkey. Just as quickly, Wallace accepted.

Which brings us back to the question, “Why do folks think Wallace did nothing as New Mexico’s governor except write Ben-Hur?”

It wasn’t that the local media spread such a story. Even papers that had criticized his appointment in 1878, including New Mexico’s Las Vegas Optic, now held Wallace up as the shining example of great leadership, and the press pleaded with him to stay.

It’s likely that Wallace’s numerous enemies—a list that included big names like former President U.S. Grant, Gen. William Tecumseh Sherman and Interior Sec. Carl Schurz—contributed to the myth of his New Mexico tenure. Many of them had blocked his various projects, and they certainly wouldn’t have given him credit for the ol’ college try.

But the actual source of the Wallace stories may have been Wallace himself. He wrote his wife on April 29, 1881, that “All calculations based on our experiences elsewhere fail in New Mexico.” Wallace predicted that Sheldon would follow in his footsteps: “Of course, he will do just as I did, have the same ideas, make the same attempts, and with the same heartiness of effort, soon cool in zeal, then finally say, ‘All right, let her drift.’”

Just one day before Wallace wrote that, the Kid had escaped from the Lincoln County jail, killing guards J.W. Bell and Bob Olinger. There was no mention of the incident in Wallace’s letter.

One month later, Lew Wallace returned home to Indiana. From there it was on to Turkey. Eventually, he gained a sort of immortality that came with authoring one of the top American books of the 19th century. Everything else became background.

Mark Boardman is a writer and Old West collector who is glad to be back home in Indiana.