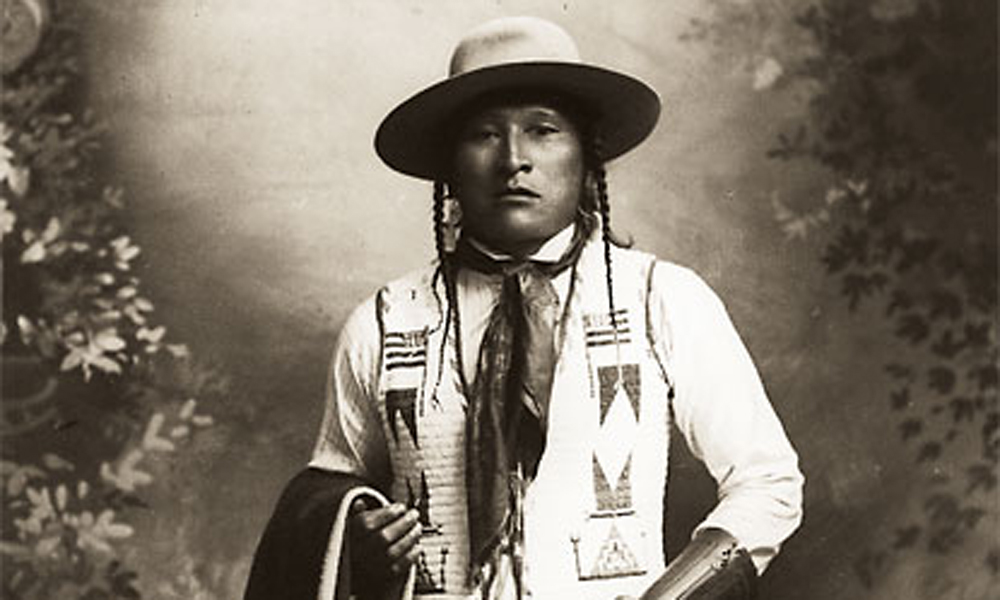 The Cherokee Kid is the most famous cowboy Indian known today.

His real name was Will Rogers, and he was born in 1879 on a cattle ranch in the Cherokee Nation that later would become Oologah, Oklahoma. His unsurpassed lariat feats would earn him a listing in the Guinness Book of World Records for throwing three lassos at the same time: the first rope caught a running horse’s neck, the other looped the horse’s four legs and the last lassoed the rider. Americans everywhere had a chance to see his talent in the 1921 movie, The Ropin’ Fool.

Yet there were many unsung cowboy Indians who were also corralled on reservations throughout the West in the 19th century. Anyone who knows their Indian rodeo history would recognize Jackson Sundown, the Nez Perce nephew of Chief Joseph, who began competing when he was in his 40s and won the world championship in 1916. In Canada, the best-known early rodeo star was Tom Three Persons, a Blood from Alberta who won the World Bucking Horse Championship at the first Calgary Stampede in 1912.

The rodeo story is one of survival. It allowed reservation Indians to turn their agricultural duties into a salvation of their customs and tribal values. Horses and cattle allowed Indians to demonstrate “virtues such as bravery, generosity in gift giving, and respect for the natural world” and the “rodeo resonated with their own cultural priorities of being with family and community members, in the outdoors, and on horseback,” writes Allison Fuss Mellis in the University of Oklahoma Press book, Riding Buffaloes and Broncos: Rodeo and Native Traditions in the Northern Great Plains.

Oklahoma Press also introduced us to Benedicte Wrensted, a Danish photographer of Shoshone and Bannock Indians on the Fort Hall Reservation from her studio in Pocatello, Idaho. Wrensted was born in Hjorring, northern Denmark, on February 10, 1859. She moved to the U.S. in 1892, after her father died, and finally settled at the age of 36 in Pocatello. She took over “Hower’s Old Stand,” run by county surveyor A.B. Hower whose work on the Fort Hall Reservation had already made the studio a popular spot with local Indians. Wrensted worked as a photographer in Pocatello for nearly 20 years, as stated in her retirement announcement in the May 18, 1912, issue of the Pocatello Tribune.

Her work is special mainly because she was a commercial photographer. She had only the sitters in mind, making portraits of them that would suit their needs—unlike the famed Indian pictorialist Edward Curtis, who captured Indian life of more than 80 tribes during 1896 to the 1930s. Curtis was revealing a “vanished race” to the world. But he never visited Fort Hall. Photographers who did visit the reser-vation included William Henry Jackson. Bannocks and Shoshones do not appreciate his views of their ancestors as Jackson made them appear to be destitute and backward. But they do appreciate Wrensted’s work, says Bonnie Wuttunee-Woolsworth, then director of the Shoshone-Bannock Museum, in Joanna Cohan Scherer’s book, A Danish Photographer of Idaho Indians.

Scherer’s book is a touching history of Wrensted’s life and her relationship with Fort Hall Indians. This photo essay is courtesy of both Scherer’s book and the U.S. National Archives collection from which Scherer culled many of her images for the book. Our favorite photos in Wrensted’s collection are those showing cowboy Indians at Fort Hall. These are the ranchers whose tribal ties the federal government tried to subdue, but never could.