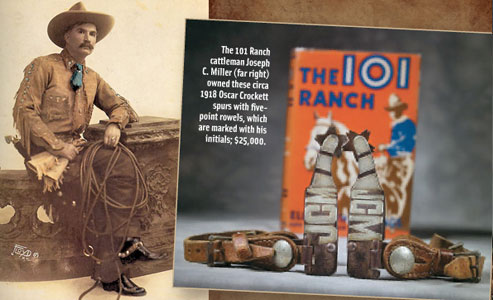 One cowboy’s badge of honor, his spurs, earned an impressive price at High Noon’s Western Americana auction in Mesa, Arizona, on January 26, 2013.

Among Oklahoma’s greatest cowboys, Joseph C. Miller, the acknowledged guiding hand of the 101 Ranch, owned the top-selling spurs, forged by one of the “Big Three” spur makers, Oscar Crockett. The spurs sold for a $25,000 bid; vintage cowboy spurs generally sell for $5,000 at most, but High Noon has commanded stellar prices as a leader in this category.

Joe was the eldest of three sons raised by former Confederate Col. George W. Miller, who leased his Cherokee Outlet cattle ranch in 1879 and officially founded it under the 101 brand when land opened to white settlement in 1893. After his father’s death, in 1903, Joe and his two brothers, George Jr. and Zack, took over the enterprise, with Joe leading the charge.

The brothers expanded the ranch’s acreage to 110,000, sprawled over four counties. Like his father, who not only raised cattle but also grew wheat, corn, cotton and other crops, Joe viewed business on a grand scale. Inspired by his neighbor, Gordon W. Lillie, who performed as Pawnee Bill, Joe turned his ranch roundups into the 101 Ranch Wild West Show that introduced the world to Tom Mix and Bill Pickett, among other rising stars. To convince the National Editorial Association to hold its convention in Indian Territory, Joe promised them the “greatest round-up on earth,” and he delivered, thrilling a 1905 crowd estimated to number 65,000. The show went on to entertain audiences at the ranch and abroad until the outbreak of WWI in 1914.

That a pair of Joe’s spurs would generate such excitement among collectors today is a credit to his legacy as an exceptional cowman. The man whose career started as a roper at the Winfield County Fair in 1882 would go on to honor his fellow cowmen by forming the Cherokee Strip Cow Punchers’ Association, which limited its membership to cowboys who worked the Cherokee Strip prior to its opening in 1893. A hospitable man, he hosted friends and prominent guests at his ranch residence, the White House. He treated his employees respectfully, whether they be Ponca Indians, whites or blacks, and he acted as mediator for their disputes. In 1927, after the 58 year old died unexpectedly from carbon monoxide poisoning while working on his car, a crowd of more than 5,000 came to pay their respects, marking his funeral as Oklahoma’s largest at the time.

Dated circa 1918, Joe’s cowboy badge of honor was crafted by Crockett at the early start of his blacksmith career. In 1916, he opened shop in Pawhuska, Oklahoma, closing it to serve during WWI. He moved on, in 1919, to work in the bit and spur department for C.P. Shipley Saddlery, a line he bought and turned into the Crockett Bit & Spur Company, which he spearheaded until his death at 62 in 1949. His spurs, like those made by his cow country peers J.R. McChesney and P.M. Kelly, were sold to mail-order saddlers, and he produced at least 100 different spur patterns.

As for Joe, his passing meant the end of an era for the 101 Ranch. After yet another brother died, in a car accident, Zack ultimately filed for bankruptcy during the Great Depression. The U.S. Government seized the 101 Ranch and sold off most of its parcels. None of the ranch’s buildings stand on the national historic landmark today. But 101 Ranch treasures have been preserved by astute collectors, allowing one lucky bidder to become the proud owner of the famed cattleman’s spurs.