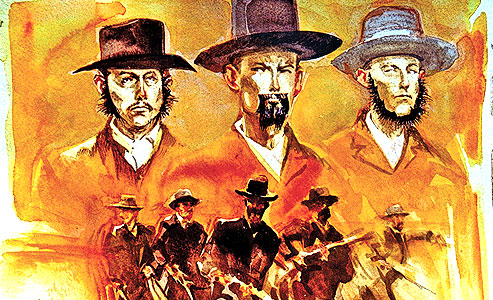 Five mounted men ride into Coffeyville, Kansas, from the west. It is around 9:30 a.m., and the streets are already filled with farmers and businesspeople.

The riders hitch their horses in an alley and proceed on foot toward the plaza (see Phase One map, opposite page). Grat Dalton, Bill Power (also styled Powers) and Dick Broadwell cross the plaza, and the trio quickly enter the C.M. Condon & Company Bank. Bob and Emmett Dalton, who are walking behind, stride past the Condon, cross Union Street and enter the First National Bank.

In spite of the strangers’ fake beard disguises, several locals recognize the outlaws. (The Daltons once lived in Coffeyville and are well known.) Iceman Cyrus Lee runs into Isham’s hardware store, shouting, “The Daltons are robbing the bank!”

At first, patrons and workers in the store laugh at the absurdity of the report. Others take the battle cry more seriously. As Lee and his fellow townsmen spread the alarm, citizens quickly arm themselves at two hardware stores and other businesses.

Meanwhile, Grat is demanding that all the money in the Condon safe be put in a two-bushel wheat sack.

“The safe is on a time lock. It won’t open until 9:30,” cashier Charles Ball says to Grat.

Grat asks what time it is. The cashier looks at his pocket watch and says, “9:20.” Even though a wall clock shows the time as 9:40, Grat accepts the cashier’s word, saying, “We can wait.”

The Condon robbers are now jumpy and impatient, as well they should be. Inside the vault sits $40,000, and the time lock story is a lie—it has been off since 8 a.m.

From 80 yards down the street, a store owner opens fire, pumping bullets into the Condon bank. The first shot pierces the plate glass window and hits Power. “I’m shot. I?can’t use my arm!” cries the robber, as he clutches his left arm.

Broadwell warns the bank employees to get under the counter, “or else you will get killed by some of these people.”

Other guns on the plaza cut loose until the plinking and whizzing of airborne missiles become “a shower and then a storm.” Bullets smash into the bank lobby from several directions, sending glass and patrons flying.

Across the street, in the First National Bank, Bob and Emmett also encounter a crowd. In addition to the three bank employees already at the bank, three customers plus two more blunder in after the robbery has begun. In spite of some plucky resistance by the teller, who claims he doesn’t know the combination to the safe, Bob ferrets out the hidden cash. Emmett scoops $20,000 into a burlap bag.

The two prepare to leave, driving the bank employees and customers in front of them. As the outlaws herd their hostages out the front door, two citizens on the sidewalk fire at the bandits from point-blank range, but they miss. One bullet nearly hits cashier Tom Ayers, but he and most of the hostages escape. (Some think these are the first shots fired in the fight.)

The two Daltons scramble back inside the First National Bank and give up on going out the front. (According to some accounts, Bob shoots out the front door at this point and hits locals Charley Gump and T. Arthur Reynolds.) Herding bank teller W.H. Shepard before them, Bob and Emmett head for the back door.

Lucius Baldwin, a 23-year-old clerk, snatches a pistol from Isham’s hardware store and dashes out the back door, hoping to gain an advantage on the robbers. At the rear of the First National Bank, Baldwin meets the two Daltons, who are coming out the back door with Shepard in front of them. Perhaps confused by their identity (which makes him the only person in Coffeyville who is), the clerk ignores Bob’s order to halt. Bob raises his Winchester and reportedly says as he fires, “I have got to get that man.”

Baldwin falls with a fatal bullet just below his heart. Other citizens in the alley scramble for cover as the two Daltons abandon Shepard and run north looking for a place to cut across the plaza to their horses.

Stopping near the corner of Eighth and Union (see Phase Two map, opposite page), Bob peers south and sees two ambushers crouching beside the First National Bank’s front entrance, waiting for another shot. Bob raises his Winchester and fires, felling George Cubine and Charles Brown. Cashier Ayers, who has grabbed a rifle at Isham’s, kneels behind a harness to take a bead on the outlaws. Bob spies him and shoots first, hitting Ayers just below the left eye from 70 yards away. (Witnesses later claim Ayers’s head squirted blood like a fountain.)

Gump, one of the first locals to spread the alarm, is struck in the hand by a bullet, which also shatters the stock of his shotgun. Another defender in front of Isham’s is also hit by a ricochet and must be carried inside to safety. (It is unclear who shoots these two, although Bob, Power and Broadwell are each credited in subsequent conflicting accounts.)

Dazed and bewildered, Grat and his crew grab what money they can find (Grat stuffs $1,100 of currency in his vest) and exit the Condon “with heads down, like facing a strong wind.” As they run for their lives, a murderous swarm of bullets follows them into what will from this day forward be known as Death Alley.

Grat and Power are hit almost immediately, but they keep their feet and run. Power tries ducking into a doorway, but the door is locked. He continues running with a slug in his back. Grat scoots behind an oil wagon parked in the alley and shoots at Isham’s through a stairwell.

Marshal Charles Connelly crosses a vacant lot on Ninth Street, while townsmen John Kloehr and Carey Seaman cut through Kloehr’s stable. Hoping to intercept the robbers, the marshal, carrying a borrowed rifle, bursts through a gap in the fence on the south side of the alley and looks west for the fugitives. Unfortunately, Grat is behind him at the staircase and levels his Model 1886 Winchester from 20 feet away. Grat’s blast hits Connelly in the back and kills him.

As Grat makes another run for his horse, Kloehr and Seaman peer into the alley. When Grat turns to monitor his backtrail, Kloehr fires, hitting the outlaw in the throat. The slug breaks Grat’s neck, and he falls in a heap.

Struck from a bullet by Joe Uncapher’s rifle, Broadwell makes it safely to the Long-Bell Lumber Yard and finds temporary cover. He shoots and kills the horses hitched to the oil tanker, so he can fire unobstructed at his tormenters. During a pause in the shooting, Broadwell secures his horse, but before he can clear the alley, Seaman and Kloehr catch him in their gun sights. The bandit reels in the saddle as buckshot and a rifle slug tear into his body. Broadwell hangs onto his saddle horn and makes it down the alley, disappearing around a corner.

Incredibly, Bob and Emmett have so far escaped being hit. “Now let’s get to the horses,” Bob tells Emmett, “the rest ought to be through by this time.”

As the last two bandits dash for their horses, Bob glances up at the high windows along the alley and takes a bullet in the chest. He stumbles across the alley and sits down hard atop a pile of cobblestones stacked beside the jail. Still game, Bob fires several more times, but he hits no one. Rising painfully to his feet, Bob staggers to the corner of the stable, sees Kloehr and fires twice, missing both times. Kloehr waits for a clear shot, takes aim and hits the outlaw leader in the chest, sending him sprawling into the alley. (Henry Isham later claims he nails Bob in this exchange.)

Still carrying the money, Emmett is hit in the torso, another bullet breaks his arm and yet a third slug hits his cartridge belt.

Two of the outlaws’ horses (Bob’s and Power’s) have been killed in the lead hailstorm, but Emmett’s mount is still standing. Emmett swings onto his saddle and is immediately hit several more times by rifle fire—in the left hip and groin. Everyone expects him to go down, but instead of falling or spurring his horse toward freedom, he reins his mount directly into the teeth of the shooting. Riding straight to his brother, Emmett leans down to give Bob a hand up.

Seaman steps clear and aims both barrels of his shotgun at Emmett’s back and fires. The last Dalton hits the floor of Death Alley face first.

Dick Broadwell made it to the outskirts of town, swaying and gasping in the saddle with a dozen wounds. A posse of townsmen found him crumpled in death between puddles of his own blood. His horse stood quietly beside him.

Cashier Tom Ayers survived. Bob Dalton’s bullet had hit Ayers just under the left eye  and exited at the base of his skull. A quick-thinking bystander, George Picker, pressed his thumb over the wound to stem the fountain of blood. Ayers later becomes the mayor of Coffeyville, Kansas.

A local newspaper reported, “Not over fifteen guns were actively engaged in the fight on both sides and the engagement lasted about ten minutes.” As the townspeople examined the outlaws, they discovered that none of the bandits’ numerous revolvers had been fired. Unlike gunfights in the movies, this had been almost exclusively a rifle and shotgun contest.

The money from the banks was recovered. The next day, the Condon bank reported a loss of $20, while the First National reported a surplus of $1.98.

Within 24 hours, 2,000 sightseers descended on Coffeyville, taking pieces of clothing and other personal items from the outlaws’ bodies.

Recommended: Daltons! The Raid on Coffeyville Kansas by Robert Barr Smith, published by University of Oklahoma Press, and What Really Happened on October 5, 1892 by Lue Barndollar, published by Coffeyville Historical Society.