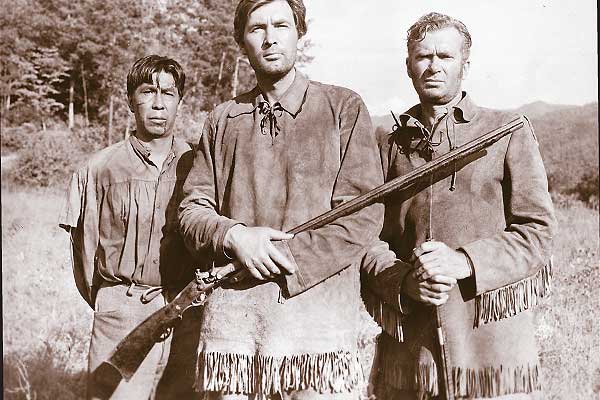 In most everyone’s life comes a moment or event that provides the catalyst to their future. In my case, that event was the 1954 TV airing of Disney’s three-part dramatic series on legendary frontiersman Davy Crockett, the Indian fighter, U.S. congressman and Alamo defender. I was utterly fascinated with the original flintlock arms used in that series. As a youth of 14, I had never before seen any real flintlocks in films or anywhere else.

These black-and-white programs were compiled the following year into a Technicolor production titled Davy Crockett: King of the Wild Frontier, which became one of the top motion pictures of the 1950s. The Crockett films stirred a national craze, and although it only lasted a little more than a year, Disney’s Crockett, portrayed by actor Fess Parker, gave the country coonskin hats, bubble gum cards, comic books and a number one hit song, “The Ballad of Davy Crockett.”

Although my interest in antique arms of all types—especially 18th- and 19th- century American guns—was born while viewing these Crockett shows, little did I know that this fascination with firearms would eventually lead to a rewarding career in the profession of arms. When many years later, I had the good fortune to meet Parker, I never dreamed I’d get to handle his original “Ol’ Betsy” flinter.

Fellow arms student and long-time amigo Joseph Musso, who has a particularly keen eye for recognizing motion picture firearms, has gathered an impressive collection of silver screen hardware. Guns such as John Wayne’s 1863 Springfield rifle, used in his first starring role in 1930’s The Big Trail (see “From Silver Screen to Gun Room” in the October 2013 issue), Charlton Heston’s flintlock Kentucky from 1955’s The Far Horizons and others.

In January 2000, when Little John’s Auction Service offered movie guns that had been purchased from Stembridge Gun Rentals by Guns & Ammo Magazine Publisher Robert E. Petersen, Musso spotted a familiar looking rifle. In this somewhat austere, full-stock Kentucky’s description was the notation that it was “…probably used in early frontiersman films.” The rifle carried an estimated value of only $900-$1,200.

Musso’s sharp eye had recognized Parker’s original “Ol’ Betsy!” Yes, the same circa 1820 flint rifle carried by Parker as Crockett and prominently featured in the Disney TV series and motion picture. Fortunately for Musso, nobody else was aware of this treasure on the auction block, and he purchased it for the auctioneer’s high estimate.

The Pennsylvania-style, double-set trigger flintlock has a rifled bore of around .40 caliber, and its curly maple stock features a half moon inlay on the cheekpiece and other German silver inlays. Its lockplate bears the name “Jas. Golcher.” The rifle is missing the tip of its ramrod, so it doesn’t extend to the gun’s muzzle. That was actually one of the main clues this was the same gun, because that is exactly how it appears in the movie’s posters. The filmmakers just weren’t gun savvy enough to notice that. Movie gun buffs can be thankful that Musso remembered this iconic TV and movie flintlock, for now “Ol’ Betsy” is in good hands once again!