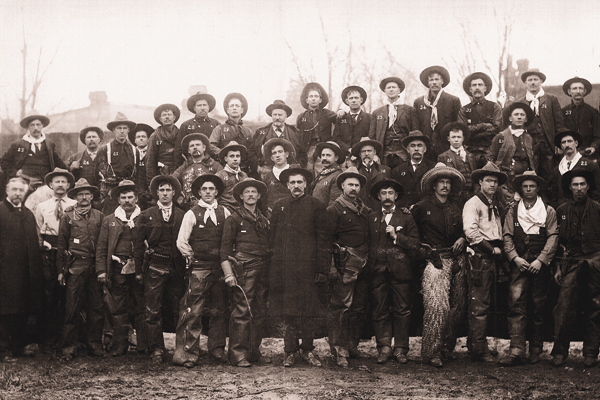 Timothy Olyphant’s portrayal of Seth Bullock in HBO’s Deadwood could be described as resolute, a term that aptly fit the real Seth Bullock.

Bullock was born to a retired British sergeant major and his Scottish wife in 1849 (one report says 1847) near Windsor, Ontario. Rebelling against his father’s stern discipline, the young Bullock left home as a teenager and in 1867, he drifted to Helena, Montana. Bullock must have taken some of his stern upbringing to heart, for he showed enough strength of character to win election as a representative in the Montana Territorial Senate in 1871 and as county sheriff in 1873. Around this time, he also formed a partnership with Sol Star to get into the hardware business.

In 1874, Bullock married Martha Eccles, then two years later, deposited his wife and infant daughter with her family in Michigan, while he and Star went to the Dakota Territory to open a hardware store in Deadwood.

The former gold-camp-now-a-mining-town was as wild as any in the West, its lawlessness fueled by money, liquor and godless characters such as Calamity Jane and Al Swearengen. Following Wild Bill Hickok’s murder in August 1876, what passed for Deadwood’s leadership appointed Bullock sheriff. Although he remained at odds with Swearengen, Bullock did tame Deadwood enough so that his wife and daughter could join him without fearing for their lives.

Over the next few years, Bullock established a ranch on the Belle Fourche River, where he raised thoroughbreds and introduced alfalfa to the agriculture economy of South Dakota. He also met Theodore Roosevelt and the two of them became lifelong friends.

During the Spanish-American War, Bullock joined Roosevelt’s Rough Riders as a captain, though he never saw combat. After the war, Roosevelt—as Vice President—appointed Bullock to supervise the Black Hills Reserve, and in 1905, made him a U.S. marshal. Following Roosevelt’s death in January 1919, Bullock spearheaded the effort to erect a monument to the deceased president on South Dakota’s Mt. Roosevelt, the first such memorial in the nation.

Bullock died in September 1919 and was buried on a hill overlooking Deadwood’s Mt. Moriah Cemetery. The discipline his sergeant major father had instilled in him as a child had served him well.