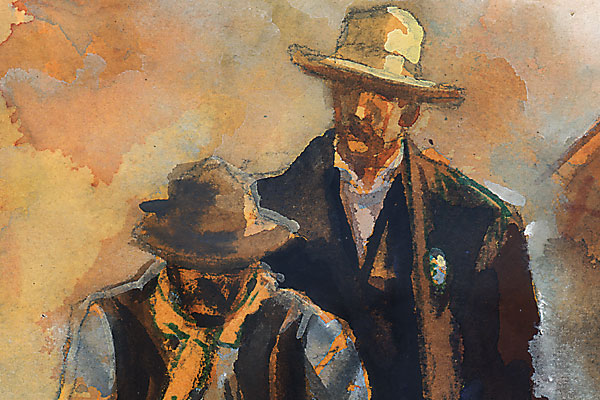 Deputy Ed Short has learned that the ill man lodging at the Rock Island Railroad hotel in Hennessey, Oklahoma, is none other than “Black-Faced” Charley Bryant, an extremely dangerous member of the Dalton outlaw gang currently terrorizing the territory.

Surprising Bryant in his room, Short clamps cuffs on him. His only problem: the closest secure jail is about 140 miles away in  Wichita, Kansas.

The next day, Short, wearing two six-shooters and carrying a Winchester rifle, marches his prisoner to the train depot. Conductor Jim Collins allows Short to ride with his prisoner in the mail and baggage car, away from the other passengers. As they board, Bryant complains that his arms ache (his hands are manacled behind his back). Short relents and uncuffs his prisoner’s hands, recuffing Bryant’s hands in front of him. The train chugs away from the station; a postal agent is their only companion.

As the train slows for its first stop, in Waukomis, Short spots several  horsemen approaching at a gallop. Concerned that a rescue attempt is under way, Short hands the postal agent one of his revolvers and tells him to watch Bryant. The deputy steps onto the platform, rifle in hand, to check out the suspicious-looking riders. The agent, busy sorting mail to be dropped at Waukomis, sticks the pistol in one of the letter pigeonholes and concentrates on his job.

Bryant seizes the opportunity. In a flash, he snatches up the six-shooter with his manacled hands. He heads out on the platform to confront Bryant and make his escape.

Short quickly brings up his Winchester and covers Bryant. For a brief second, officer and outlaw glare at each other over leveled weapons. Both open fire at point-blank range; Bryant cocks the hammer and triggers the Colt revolver, and Short levers and fires his Winchester.

Struck in the heart and spinal cord, Bryant falls, gasping his last breath. Although mortally wounded himself, Short drops his rifle and grasps the legs of the outlaw, yelling for help. Conductor Collins rushes to his assistance. Together, they pull Bryant’s body back onto the platform.

As more help arrives, Short collapses. Stretched out on the platform beside Bryant’s body, Short, just before he dies, says, “I got my man, but he got me too. I would like to see my mother.”

As for Bryant, he got his wish.

Born and raised in Indiana, Ed Short, 17, headed west to Kansas to become a cowboy. He worked cattle around Hunnewell and Caldwell, and may have worked in law enforcement before moving to Stevens County.

Descriptions of Short vary. Glenn Shirley called him “small of stature, quiet in manner, and dudish in dress … not a man to inspire fear. He was a bad man in the sense that he was fearless. Like the dime-novel hero, he reveled in deeds of blood and valor, but there was little bravado about him.” Sam Riding, an old-timer who claimed to know Short, said he was “of large and robust physique and commanding appearance. He had the appearance of a fearless and effective officer, which he was.” Both writers agreed that Short was blond.

We know that Short was actively involved in Kansas’ county seat wars. He served as a lawman in Woodsdale; the citizens appreciated his work so much that they presented him with a specially engraved Colt—which he later lost in a fight with representatives of a rival town. He married in 1887, but his wife committed suicide after just five months into wedlock.

Short joined the land rush in 1889 and settled in Hennessey in the Indian Territory, where he was elected city marshal in that town’s first municipal election. When Oklahoma Territory was established in 1890, U.S. Marshal William Grimes appointed him one of his first deputies.

The next year, Charley Bryant got his wish to die in “one hell-firin’ minute of smokin’ action.” Short (below, at top) was laid out next to the dead outlaw, where he too expired. It’s a sad note that Short lost his life for being compassionate. Had Bryant’s hands been kept manacled behind him, he likely could not have orchestrated the bloody finale.

The mother Ed Short never got to see again, Mrs. L.M. Short of Osgood, Indiana, was presented with a check for $500, donated by the Santa Fe Railroad. The reward had been offered by the railway line for the arrest and conviction of any member of the Dalton gang that had held up a Santa Fe train in Wharton, Indian Territory, on May 9, 1891.

It’s unclear what illness “Black-Faced” Charley Bryant suffered from in Hennessey. Some accounts state it was malaria.  Others posit that he was being treated for a venereal disease. It’s also not clear how old the Texas native was when he died.

Short was buried in Osgood. Bryant’s body was claimed by relatives and transported to Decatur, Texas. His body is probably buried in the cemetery there, along with several of his kin, but no tombstone marks his grave.