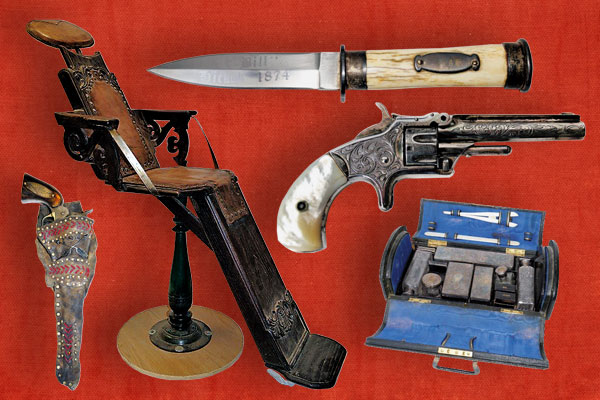 You could find just about everything good and bad about the buying and selling of Old West artifacts in Harrisburg, Pennsylvania, this past July 15-21.

The good: Curious by the artifacts former mayor Stephen Reed had bought with the intention of stocking a Wild West museum, thousands of people bid, both online and in person, on around 8,000 pieces of frontier memorabilia and paid nearly $3.85 million, making it one of the largest auctions of its kind. Well over 100,000 others watched the bidding online, says Arlan Ettinger, president of Guernsey’s.

Now, the bad: The net profit for the city of Harrisburg is $2.7 million (after Guernsey’s $480,000 commission, plus other expenses). Even when this amount is added to the profits for auctions of other Harrisburg memorabilia in 2007 and 2008, the city doesn’t even recoup half its original investment of $8.3 million.

Guernsey’s sold each of these items in July on a “Buyer Beware” basis. Or, as The Patriot-News phrased it, “When it comes to verifying value, condition and authenticity, you’re on your own.”

But this warning didn’t stop people from shelling out for what might or might not be a legitimate piece of the Old West.

As you might expect, the event’s high rollers were lots tied to O.K. Corral icons Wyatt Earp and Doc Holliday. A document said to be signed by Wyatt and Mattie Earp, from the sale of their house in Tombstone, Arizona, fetched $55,000 from an Internet bidder. But Holliday tied the Earps with a $55,000 bid for a frock coat alleged to have been worn by the gunfighting dentist, plus a dental chair, purported to be tied to him, went for $40,000. Isn’t that a daisy?

Not everyone who attended the auction bid. One amused spectator from nearby Carlisle told me, “It’s great fun to see all this, but I think you’d have to be drunk to pay this kind of money without being darn sure it’s for real.”

Maybe, but as Doc might have said, “In vino veritas.”

The author of Inventing Wyatt Earp and this year’s Mickey and Willie, Allen Barra is also a sports journalist for The Wall Street Journal and writes for American History Magazine.