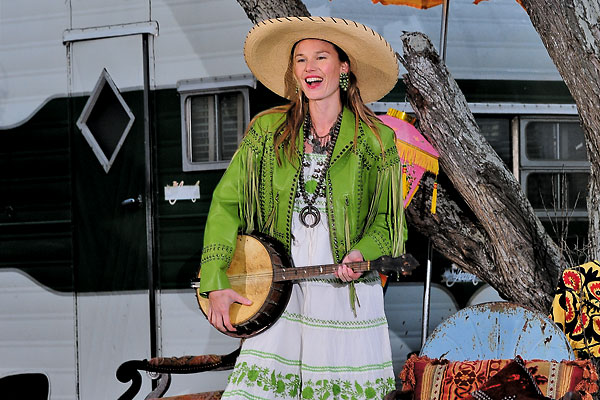 With roots planted in 1830s land grants from the Republic of Texas, the family of the McMullen sisters is part of the rich tapestry that is the history of Texas.

In their own right, Cheryl, Audrey and Hedy, and their mother Margie, are passionately embroidering on that tapestry in a significant and literal way. They are the founders and owners of Double D Ranch, one of the most artistic, groundbreaking and influential contemporary apparel brands rooted in the West.

Ethnic, often exotic, themes, colors and textures permeate the apparel collections from Double D Ranch, which is based in Yoakum, Texas. Last fall, the theme was 19th-century Russian. This spring it is a dazzling array of Silk Road ensembles. Whether it’s a take on a Cossack tunic, a geisha tattoo graphic or an embroidered Mexican wedding dress, Double D clothes often exhibit a familiar Western feel. This gathering of seemingly incongruent worlds works, after all, because the Old West was explored and settled by adventurers and pioneers, indentured laborers and shady characters from all walks of life and nearly every ethnic persuasion.

Behind this textile travelogue is Double D’s resident designer, Cheryl, the oldest McMullen sister. Cheryl is a Texas cowgirl with a Bohemian attitude and a gypsy soul. She was raised with her two sisters by parents who owned a car dealership in south Texas and trained and raced Quarter Horses on the side. All the sisters share a strong bond from spending weekends together at the racetrack in Ruidoso, New Mexico. This environment also nourished Cheryl’s artistic nature. Racetrack habitués tend to be a colorful lot, and during her adolescence she was exposed to a pantheon of well-heeled breeders, itinerant Mexican stable hands and luckless gamblers, as well as the hippies and American Indians who sold trinkets and crafts at the racetrack in the 1970s.

All of those influences turn up in Cheryl’s designs, so she chafes at the “Western” label often affixed to Double D Ranch products. “In my mind, I don’t see myself as a Western designer,” Cheryl says. “I have always tried to target American fashion. Yes, it may have some Western influence, or Native American influence, or some of that ’60s and ’70s culture, Bohemian hippie influence, but I’ve always tried to target people like my sisters and me: What would we wear?”

Despite her protestations, she also admits that her inner Boho is tempered by her rural Texas sensibility and an abiding love of the American West and its lore. While her imagination may wander from Yoakum, her heart is always there.

Perhaps the best evidence of that intriguing dichotomy is last fall’s line. Cheryl was pondering a Gucci fashion gambit and how to reinterpret it when a visit to the Buffalo Bill Museum in Cody, Wyoming, sparked inspiration. Cheryl saw an 1872 photograph of Grand Duke Alexei of Russia with George Armstrong Custer posed with trophies from a buffalo hunt in western Nebraska. She parlayed that photo into an elegant 19th-century Russian stylefest dubbed the Royal Buffalo Hunt.

“When I decided I was going to do this Royal Buffalo Hunt thing, I spent several weeks just researching that event: what all was involved, who were the characters,” Cheryl says. “Then I start this game that I play where I think, ‘Ok, what would they wear? What were they doing?’ I kind of created this crazy little story in my head, and the ideas evolved from that. It’s part of the design process.”

Because that process takes her well beyond the expanses of rural Texas and incorporates influences from pretty much wherever her interests and research lead her, she and her sisters call the line Americana.

In fact, Double D Ranch products are found mostly in high-end fashion boutiques, especially in resort areas. The line is pricey but always well made, and it is designed to appeal to devoted and infrequent Western lifestyle customers alike. Betsy Talermo, owner of Jackson Hole Clothiers, sells “contemporary lifestyle clothing with a Western flare” in Jackson, Wyoming. She was one of the first retailers to carry Double D. “They’re unique, they have artistic value, they connect with historical Western themes and events,” Betsy says of the clothes. “What makes me most proud about selling Double D products is that the major items seem to be somewhat timeless. When I go to the National Finals Rodeo in Las Vegas, I’ll see jackets and other things from past collections. When I see them, it’s not like, ‘Remember that old thing?’ You’re like, ‘Oh, I wish I would have gotten one.’”

This year marks the 20th anniversary that Double D Ranch has been in business, and the sisters plan to celebrate with sales and special events throughout the year. Were it not for serendipity, fate, divine intervention or whatever you choose to call it, Double D may never have gotten off the ground. Cheryl’s glimpse of a coat made from a Pendleton Indian blanket while on a ski trip led to a series of accidents, chances and miscalculations—any one of which could have been disastrous for the fledgling business.

With the financial help of their parents Doug and Margie, Cheryl and her sisters decided to make a few Indian blanket coats and sell them at a Dallas fashion market. “We didn’t have a plan that we were going to do this forever,” Cheryl says. “We were going up there for a one-time thing, sell some coats, pick up some money—that kind of thing.”

Even naming the company was something of a haphazardous affair. “When we named it, we didn’t name it thinking long term,” Cheryl admits. “We needed a label. There was a deadline, and we had to come up with something real quick to get our labels on time. We came up with Double D Ranch, and we just said that stood for Doug and daughters. We really didn’t put a lot of thought into it.”

Out of the blue, the McMullen sisters and their parents found themselves in the fashion business. Although Doug, the sisters’ father, is no longer part of the company, the sisters and their mother are still partners in the company. Her family members are enthusiastic enablers of Cheryl’s artistic vision. Audrey and Hedy both help keep her grounded by editing her designs, and Audrey handles marketing, while Hedy sees to getting the lines produced and to market.

The primary focus over the years has been on jackets and skirts. A few years ago the sisters added denim and graphic t-shirts to the mix. They also helped launch the interest in Western home décor with their line of home furnishings in the early 1990s—Cheryl and Audrey ran an interior design studio prior to launching Double D Ranch.

In a blog announcing the 20th-anniversary year on the company’s website DDRanchWear.com, Cheryl wrote, “Twenty years is a long time in this industry and we are so thankful for each and every minute of it. It has been an amazing journey, and we feel so blessed to have been able to work together as a family doing what we love. We have made some great friends along the way and are excited and looking forward to celebrating our ‘silver’ in five. Are you with me?—Great!”