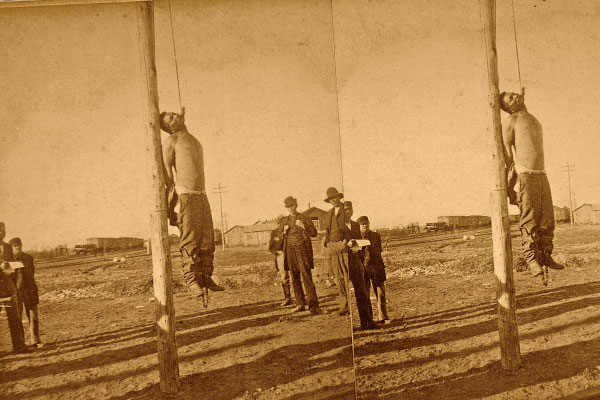 The summer after William “Billy the Kid” McCarty cheated his hangman and successfully broke out of jail, killing two guards during his escape, citizens of Las Vegas, New Mexico, encountered a new horror.

They didn’t let their man get away this time. The frontier justice they delivered was captured in a stereoview that sold at Cowan’s Auctions on March 30, 2015.

Why did the enraged citizens hang this man to a telegraph pole? His name was José Mares, alias Frank Tafoya, better known as Navajo Frank. On June 26, 1882, at about 9:30 p.m. he rode up to R.H. Hunter and wife, who were walking along Main Street, threw a lasso around Hunter and yanked him up the stony road.

After being dragged 100 yards, Hunter found respite only when a hackman pulled his revolver and shot at the outlaw. Navajo Frank cut the lariat from his saddle pommel, releasing his victim, and rode off. Hunter was taken to his home on Sixth Street. He had several cuts on his scalp, a badly bruised face and nose, an indenture in his tongue and a lacerated neck, but no broken bones; he recovered.

Hunter, who had moved from Topeka, Kansas, a year or so before, had never seen or met the desperado, stated Miguel Antonio Otero Jr. in My Life on the Frontier, 1882-1897. His assailant, a full-blooded Navajo born on New Mexico’s Fort Sumner reservation, was raised by Taos sheepherder Julian Mares before he turned criminal as a rustler and murderer. Otero had known Navajo Frank since 1877, when, in El Moro, Colorado, the bullwhacker killed dance hall girl Jennie Lawrence. This latest “cruel deed,” Otero stated, must have been caused by “pure devilment.”

Two posses went after Navajo Frank. Officer Harry Franklin and his men found the outlaw at Serafin Polacco’s ranch along the Sapello River, about five miles from the city. They brought him to the city at daybreak and threw him in jail.

At midnight, an angry crowd of about 200 townspeople marched to the jail. They battered down the door, shot at the cops to keep them at bay and got the keys for Navajo Frank’s cell. The badman fought the mob. Otero described him as a “powerful, heavy-built man with arms like a trip hammer.” After repeatedly striking the outlaw with their revolvers, though, the townspeople were able to throw a rope around his neck—the same lariat he had used to drag Hunter down the street.

The mob pulled Navajo Frank out of the jail, across the plaza and to a telegraph pole near Railroad Avenue. They tied his noose to the pole’s crossbeam, where he hanged, having lassoed his last man.

Navajo Frank’s fate lives on in the stereoview that sold for a $2,200 bid, among other stereoviews that also reveal intriguing slices of Old West history.