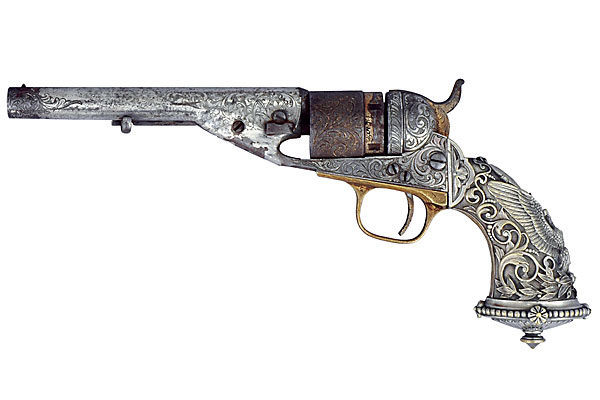 On the raw American frontier, vestiges of the settled, more civilized societies could be seen in the hands of good and bad men alike through their highly-embellished pistols.

Several Texas Rangers, Arizona sheriff John Slaughter and the “Prince of Pistoleers,” James Butler “Wild Bill” Hickok, were among the Old West lawmen who carried engraved six-guns. Wild West show folks such as Buffalo Bill Cody and Annie Oakley often relied on superbly decorated arms to blaze their way through many of their performances. Even when found on the guns of unsavory characters such as John Wesley Hardin, Doc Holliday and Cole Younger, any added décor to the hardware lent a touch of dignity to these hard cases.

Anyone who was anyone had a gun worth brandishing. Paying homage to such artistry, the Autry National Center will celebrate historic firearms with artistic flair at its Museum of the American West in Los Angeles, California. Open from May 18 through August 12, “Pistols: Dazzling Firearms” will bring together more than 50 extraordinary revolvers selected for their superb quality, condition and elegance. Guns will be culled from the Autry’s collection, as well as from leading firearms collectors.

To give meaning to tools and religious and other symbolic objects, man has incised and reshaped objects, and applied to them precious metals, ivory, pearls and exotic woods. Such artistic talent was not wasted on prized firearms. To many, the elaborately-decorated handguns of the mid-19th century through the 20th century are considered the high-water mark of firearms artistry. While many examples were crafted solely for the sake of exhibiting the gun maker’s art, others were produced as working tools and put to use by some of the era’s most historic figures.

The Autry’s exhibition will include revolvers from the Old West such as a famed engraved and ivory-stocked 1851 Navy Colt purported to be owned by Wild Bill Hickok, Annie Oakley’s Smith & Wessons presented to her by her husband Frank Butler and an engraved and Tiffany-gripped Colt Model 1862 Police and Pocket Navy Conversion pre-sented to Frontier Indian Scout Capt. Cyrus McKneeley Scott. The exhibition also showcases 20th century firearms used by Western movie stars such as Tom Mix, Buck Jones and Gene Autry.

One highlight of the collection are several firearms commissioned by George A. Strichman, former chairman of the board of Colt Industries. One, heralding back to when Tiffany & Co. had decorated Colt firearms in the 1860s, featured such exquisite designs that it brought Tiffany back into firearms decoration in 1985. Gold seahorses, shell motifs, silver-inlaid dolphins and grips with sterling silver and vermeil depicting Strichman’s yacht, the Peacemaker, were superbly executed by Tiffany designers Paul Epifanio and Larry Wojick.

Samuel Colt may have made men equal, but when it comes to their chosen equalizer, the Autry show proves some pistols are of a higher caliber than most.