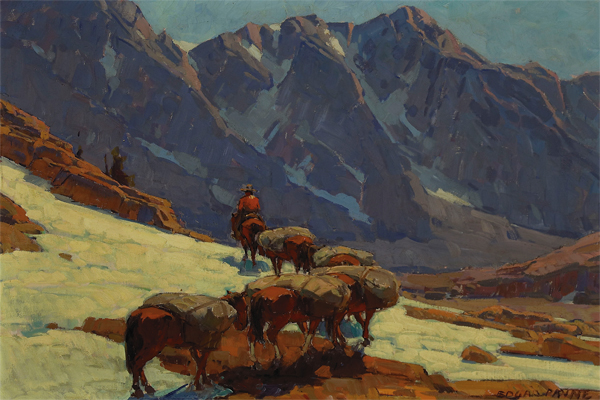 His painting style fit right into southern California’s plein air landscape tradition. En Plein Air is a French expression for “in the open air,” and it describes painting in the outdoors, rather than in a studio.

As one of its adherents, Payne is internationally famous for his Sierra Nevada depictions. His love of the mountains led him to produce the documentary film, Sierra Journey; and up in Humphrey’s Basin, you’ll find a lake named for him. Payne’s painting of Sierra Pass topped Bonhams & Butterfields’ auction of California & American Paintings and Sculpture on December 12, 2005. The hammer price was $160,000.

In 1918, Payne and his artist wife of six years, Elise, opened a studio home in California’s Laguna Beach, where he founded the Laguna Beach Art Association. Other artists associated with this art colony were also featured in the auction, most notably Joseph Kleitsch, Clarence Hinkle, William Wendt and Granville Redmond.

Over the years, the Laguna Art Museum (established by Payne’s foundation in 1918) had moved away from its Plein Air tradition. But in 1999, the museum directors reconnected the past ties to the founders by creating the Laguna Beach Plein Air Painting Invitational. Artists can again share in a colony devoted to the love of painting in natural light.

For those landscape painters who came before them, Plein Air art is still celebrated by auction houses such as Bonhams & Butterfields, which will hold its California paintings auction three times a year: April, August and December. Its December auction closed at almost $4 million in bids.