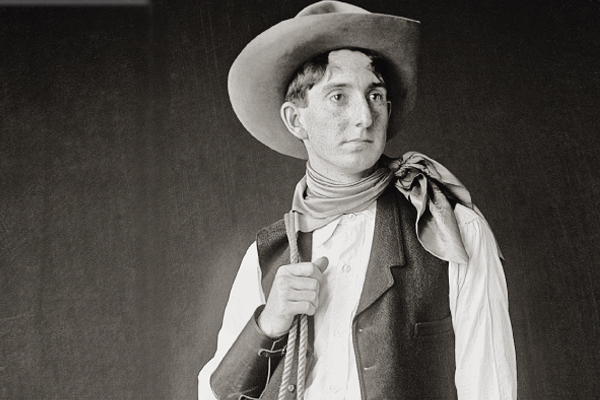 Texan Erwin Evans Smith is regarded as one of the greatest photographers of the day-to-day life of the cowboy in the American Southwest.

Smith hailed from north Texas, born in Honey Grove—an area discovered a half-century earlier by Tennessean Davy Crockett—on August 22, 1886. The family relocated 16 miles west to Bonham in 1894 when Erwin was eight. Even as a boy, he was artistic and sketched a romanticized cowboy life, particularly the scenes at his uncle’s ranch in Foard County, near Quanah.

In his teens, Erwin was given his first Kodak box camera, which he carried with him as he worked as a cowhand across the Southwest. His images capture an era of the working cowboy, depicting roping, branding, herding, horse breaking, and tools and tack used by the diverse groups of cowboys working together.

In 1904, Smith left Texas for the Art Institute in Chicago to study with master sculptor Lorado Taft. His goal was to make Western bronzes of the scenes in his photographs, but a career as a sculptor eluded him. Two years later, Smith was off to the Boston Museum School of Fine Arts and further instruction from sculptor Bella Lyon Pratt. Whenever he could, Smith went back with his Eastman screen focus #5 Kodak camera fitted with a Goerz lens to his beloved Southwest to work and photo-graph the ranch life he loved.

In 1908, a Boston art salon featured 40 of Smith’s photographs. George R. Patullo, the Sunday editor of the Boston Herald wrote about Smith, which
brought the Texas photographer national attention. Pattullo and Smith became close friends and traveled West together to photograph and write about some of the largest and legendary spreads—the OR Ranch in Arizona’s San Rafael Valley, the Three Block Ranch in New Mexico, and the Turkey Track, the Matador and the Spur ranches in Texas. Smith’s photos accompanied many of Pattullo’s articles in McClure’s and Saturday Evening Post.

In 1911, Smith returned to his father’s land in Fannin County to establish his own ranch, but by 1917 he was out of money and bankrupt. He tried to get his photography published but to little profit. In 1932 he moved to outside of Bonham in into the home of his half-sister, Mary Alice White Pettis.

Smith wrote later in life, “From the first time I laid eyes on the sun- burnt plains of the West, with its grand scenery, I have been in love with its still, enchanted solitude.”

Smith died September 4, 1947, and was buried in Honey Grove. His life was dedicated to honoring the truth of the old-time cowboy—a working man on horseback.

Tom Augherton is an Arizona-based freelance writer. For those who would like to learn more about the life of Erwin E. Smith, Augherton recommends a visit to the Amon Carter Museum of American Art in Fort Worth, Texas, and the museum’s website CarterMuseum.org, which has an extensive online collection of Smith’s photographs.