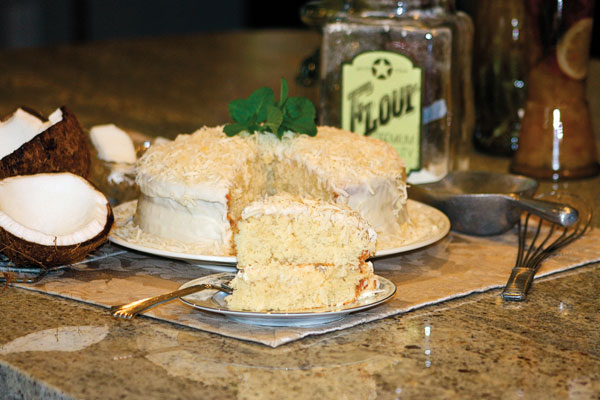 Mark Twain’s critical view of the exotic coconut tree, which he described as a “feather-duster struck by lightning,” didn’t keep American pioneers from appreciating the fruit it bore.

Coconuts, despite being from tropical locales, became popular in the American West in the mid-1800s. Usually spelled cocoanut or cocoa nut, the fruit could survive the sea voyage during an era of unrefrigerated sailing vessels. As early as 1860, The Daily Evening Bulletin in San Francisco, California, advertised coconuts for sale: “Cocoa Nuts…Schooner Hornet, 42 days from Fanning’s  [sic] Island, Direct.”

American pioneers not only used coconuts for food, but also used coconut oil to make soap and hair products. The U.S. imported both from the Hawaiian Islands, Fanning Island, Tahiti and other locales. In 1869, The Daily Bulletin in Leavenworth, Kansas, reported merchant A. Biega had received 1,000 coconuts in June. That entire year, the U.S. imported nearly one million coconuts.

By the 1870s, thanks to a new product called desiccated coconut, cooks and housewives no longer had the arduous task of breaking open coconuts to shred the tropical fruit. In 1872, San Francisco’s The Daily Evening Bulletin reported, “New York and its vicinity takes hundreds of thousands of cocoanuts, desiccates them, so that at all times and seasons of the year you can have your cocoa-nut puddings or cocoa-nut candy. One firm alone prepares monthly 140,000 cocoa-nuts in this way.”

Children and dogs liked coconuts, too, but for different reasons. In May 1883, some young boys found a way to get the “nuts” for free. The boys wanted the coconuts so they could sell them for about 18 cents per pound—the equivalent of $4.50 today. When the schooners reached San Francisco, young boys employed the help of playful pups on the wharf. The boys would “accidentally” kick a coconut, and the dog would chase after it. The dog then absconded with the coconut and added it to a pile of them around the corner. The city’s Evening Bulletin reported, “This continued for some time, and was enjoyed by some who saw the affair.”

While some dogs played with the coconuts like they were balls, others got their coats shiny for dog shows by bathing in coconut oil. Then in 1889, one man placed an ad stating dog owners should switch to Ivory Soap. Yes, that Ivory. It was invented in 1879, and John Bolus claimed the soap was cheaper and better to use for dogs over coconut oil.

Coconuts themselves were chiefly a food staple. The most popular coconut dishes were cakes, pies, cookies (called drops), candies and, to quench your thirst, coconut sodas. The invention of baking powder in the 1850s allowed cooks to easily create layer cakes, such as the yummy coconut cake shared in the frontier recipe.

Cream butter and sugar together in a large bowl.
Add the eggs and vanilla, and beat until smooth and foamy.
Combine the flour, baking powder and salt in a bowl and stir.
Add the flour mixture and then the milk to the egg mixture.
Once combined, beat for about three minutes until light and fluffy.
Pour mixture into greased and floured nine-inch cake pans.
Bake at 350°F for 25-30 minutes or until done. Test with a toothpick.
Cool and spread with your favorite frosting, and then coat
the frosting with coconut.