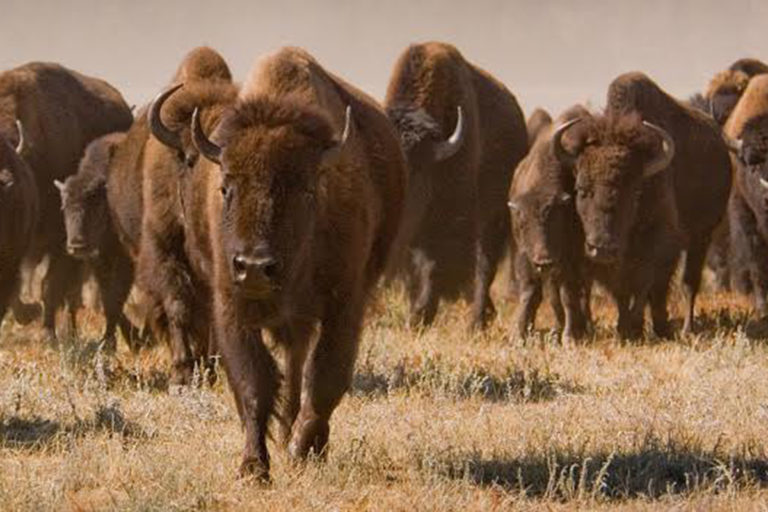 In an odd sort of way Bill Cody helped in the preservation of the bison. In 1867 Cody was hired by the Kansas Pacific Railroad to feed construction camps. He was paid $500 a month, a princely sum for the era. His obligation was to supply headquarters with 10 to 12 carcasses a day. In eighteen months he knocked over 4,280 animals, a staggering number, but a mere “grain of sand on a beach.”

True, as a hunter he killed thousands to feed the railroad workers, track layers and gandy dancers building the transcontinental line and perhaps couldn’t be called an activist in their preservation later. What he did was to make the rest of the world aware of the American bison. The buffalo hunt was a staple in his Wild West shows for three decades.

The image of the bison became the symbol of the American West in the hearts and minds of millions. Thus, Cody had a vested interest in making sure the specie was preserved.

The myth of the buffalo being driven to near extinction by hunters needs to be laid to rest.

According to an article in 2015 by Dr. Sam Fadala, Buffalo Hunted to Near Extinction, sixty million free-ranging bison spread out over hundreds of thousands of square miles could have never been wiped out by hunters.

So, what nearly wiped out the bison? Domestic cattle diseases likely wiped out far more bison than bullets.

Dr. Fadala writes, The American buffalo (bison) was not shot off, because it could not be rendered extinct by bullets due to incredible numbers, vast and often unreachable habitat, primitive travel methods, and inferior firepower. In support of his thesis Dr. Fadala continues, Invading Martians are destroyed in H.G. Wells’s The War of the Worlds “by the humblest things that God had put upon this earth after all of man’s devices failed.” Microbes.

“Little Boy and Fat Man, dropped from the Enola Gay and Boxcar, atomized Hiroshima and Nagasaki in the waning days of World War II. But loss of life was microscopic against the onslaught of the Black Plague in Europe. That pandemic reduced over 30 million people to corpses in the 1340s.”

“Following World War I, the Spanish Influenza took a greater toll in a couple months than all the bombs, bullets, and mustard gas railed against soldiers from 1914 to 1918. That the buffalo was wantonly slaughtered is fact. That the breed was destroyed by guns is ludicrous.”

Dr. Ralph Kouchy, pathologist, came to the same conclusion pointing out 1883-1884 as the critical years. Hunters found huge stacks of bones in Montana but the animals showed no sign having been shot. They had “simply laid down and died.”