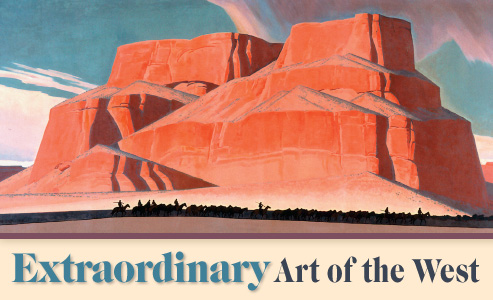 These days, fans of Western American art should feel a bit like kids let loose in a candy store. The opportunities to enjoy fine Western art have never been greater. In recent years, new museums have been built and several established museums have expanded, renovated and reconfigured its galleries to showcase collections of Western art.

The rise in stature within the greater art world is further recognized at auctions, with record-breaking prices being realized for works by Western artists.

The upswing in attention has encouraged innovative gallery and museum exhibitions, spurring creative artists to re-imagine traditional Western subjects and introduce new ideas into the genre. These curators greatly appreciate historical works, while they also give equal due to contemporary artworks offering fresh approaches.

When it comes to historical artists of the West, one of the most beloved figures is Charles Marion Russell. He lived during a time of dramatic changes in America as a witness to the end of the American frontier. Russell became famous for romanticized depictions of ways of life that had largely already passed. Nevertheless, because of his skill to tell a story in his compositions—such as the view of a stagecoach robbery about to take place in 1926’s An Unscheduled Stop (p. 83)—he continues to influence today’s painters, sculptors, photographers, writers and cinematographers.

Howard Terpning is highly regarded among living artists of traditional Western subject matter. He can be appreciated as an artistic descendant of Russell, thanks to his ability to tell a convincing visual tale. Like Russell, Terpning began as an illustrator. His background helps him weave rich narratives into his carefully researched and realistically portrayed paintings. A member of the Cowboy Artists of America since 1979, Terpning creates canvases that show in several museums. Collectors can expect to pay in excess of a million dollars to acquire a major work.

Narrative, however, is not left strictly to traditionalists. Many artists who push Western art forward with bold use of color and abstract forms are equally capable of providing a rich chronicle. Examples can be found in the Pop Art styles of Bill Schenck and Donna Howell-Sickles, and in the abstract forms of Thom Ross. Schenck, a second-generation Pop artist, explores popular Southwestern culture and life in brilliant paintings that simultaneously celebrate and tweak Western stereotypes. Howell-Sickles delights in the freedom women find in the West. Her joyful, poster-like designs of cowgirls set before solid blocks of color, however, offer far deeper meanings than are apparent at first glance. Ross, with his flattened, angular characters, is as serious about the history of the Old West as Terpning is, even if his presentation leans toward abstraction.

Whether presented in an abstract or traditional style, the land itself is vital to Western art. Beginning with the grand landscapes by 19th-century explorer-artists such as Albert Bierstadt and Thomas Moran, the Western terrain continues to inspire. Maynard Dixon was one who strongly responded to the unique qualities of light and shadow found in the Southwest. Measuring nearly 8 by 18 feet, Dixon’s monumental Red Butte with Mountain Men (p. 72-73) depicts mounted figures leading a string of horses in shadow beneath an ocher butte bathed in sunlight.

The play of light and shadow in Dixon’s landscapes can also be found in numerous Western photographs, a mechanical medium that came of age during the time of Westward expansion. Early photographers like Carleton Watkins and Charles Weed informed later works by Ansel Adams, who in turn instructed Jay Dusard. Today, Dusard is a leader among contemporary photographers, capable of finding unique perspectives that force viewers to reconsider well-known subjects. Dusard is included in the West Select, an annual exhibition and fundraiser
at Phoenix Art Museum that introduces new concepts and innovative artists to collectors.

West Select in Phoenix, Arizona, is one of many museum-sponsored exhibition fundraisers of Western art around the country. Other exhibitions bringing collectors and artists together include the Prix de West and Cowboy Crossings at the National Cowboy & Western Heritage Museum in Oklahoma City, Oklahoma; Masters of the American West at the Autry National Center in Los Angeles, California; Coors Western Art Exhibit & Sale in Denver, Colorado; Art of the American Cowboy in Las Vegas, Nevada; and Quest for the West at the Eiteljorg Museum of American Indians and Western Art in Indianapolis, Indiana. Each venue offers a slightly different perspective on Western art. Female artists, for example, are featured in Cowgirl Up! at the Desert Caballeros Western Museum in Wickenburg, Arizona.

As the works of art presented on these pages demonstrate, we live in a wonderful time to appreciate the art of the American West.

Jerry N. Smith, PhD, is the curator of American and Western American Art at the Phoenix Art Museum in Phoenix, Arizona.