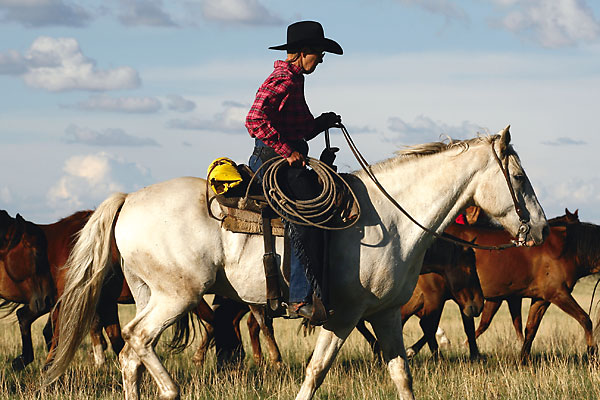 “Wink” Crigler grew up as a true child of the Old West-a granddaughter of pioneer ranchers in northeastern Arizona, she learned to ride a horse and respect the land on her father’s White Mountain ranch.

Dad gave his Saramarge the cute nickname that has stuck for a lifetime as a teacher for 24 years, the wife of a rodeo Quarter Horse trainer and now, in her “retirement years,” the rancher who is still protecting the homestead.

These days, her X Diamond Ranch, nestled in South Fork Canyon on the Little Colorado River near the village of Greer, not only is home to 200 “mother cows” but is a popular vacation spot
for those who come to its log cabins to trout fish, horseback ride, mountain bike and hike in the ponderosa pines. She even has a small museum on the ranch to commemorate the history of the area, including nearby Fort Apache, established in 1870.

The X Diamond is one of 10 Arizona ranches selected by the University of Arizona Science Department to monitor range health, and Wink has been involved with the National Riparian Grazing Management Team to keep the extensive vegetation growing near the river on her land thriving. She’s active with the Ranching Heritage Alliance, a group that promotes goodwill and relationships, and works to protect the “traditions and integrity” of ranching.

“I say it every day, I was blessed to be born here,” says Wink. “I know the importance of lifestyle and preserving open space.”

She never dreamed that she would face the “fight of my life” to protect her ranch. She couldn’t have imagined she’d spend four years in a courtroom fighting off a developer who has gained notoriety as one of the most destructive developers Arizona has ever seen.

“It was totally absurd and the most miserable thing I ever had to fight in my life,” she says. “He was so intimidating and rude, but I’m a very determined person and I stuck to my guns.”

It all began several years ago when a Scottsdale developer named George Johnson bought some 35 acres next door to Wink and told her he wanted to buy her ranch. “I said ‘No, it’s been in my family since 1890, and it’s not for sale.’”  He asked her if she wanted to be his “partner” in redeveloping the land into houses and condos and mobile homes; she again said she had no interest.

“The next words out of his mouth were ‘I’ll force you out,’” she recalls. Within 30 minutes, he had started. She remembers driving down the road that has led into her ranch for more than 100 years—one of those “easements” that started out as a cow trail and then became a wagon trail and then became a gravel road—a strip of land that has been used by the same people for the same reasons for so long, it appears on every area map as the entrance to the X Diamond Ranch.

Johnson had discovered this easement had no formal decree. “Nobody had ever questioned it, so it had never been through the courts,” says Wink, adding that Arizona law recognizes this kind of “everybody-knows” roadway, stating that once an easement is in constant use for seven years, it is permanent. This one had outdone that by some 93 years, but Johnson didn’t care. “He thought he could use his money and his power,” she says.

When she drove toward her ranch that day, she saw Johnson’s threat come to life; he had sent his bulldozers to the entrance of her ranch and ripped up the road. “There were deep furrows and people couldn’t get in or out,” she remembers. She was flabbergasted at the assault on her ranch, but that wasn’t the end of it.

“He built a pig pen on the side of the road and put in two pigs. He put up lights and a sign that said ‘Please don’t feed Wink.’ That stayed up a couple years.”

Once she caught him driving through her pasture, and she told him to get off her land. More than once he threatened  he was going to “go after” her land leases with the state and U.S. Forest Service.  “Everybody advised me to be very careful with him,” she says.

Although she admits the conflict was scary and miserable, she kept fighting.  “It was my whole life at stake,” she says. “I knew I was right. I wasn’t going to back down. People say you can’t make a difference, but you can.”

The most heartwarming part was that she found she wasn’t alone in fighting a developer who has the dubious distinction of three times paying the highest environmental fines for despoiling the land in the history of Arizona. (At one point, five state agencies were suing him at the same time.) He has also paid record fines to the U.S. Environmental Protection Agency.

“Hundreds of people came on board to write letters for me and testify for me,” Wink says. Arizona’s Land Department went to bat for her in court. So did the Forest Service. So did her neighbors.

After she spent more than $40,000 in legal bills, the court did just what Wink knew all along it should do, ruling that the road into her ranch had long ago met the criteria for a permanent easement. Johnson eventually sold his neighboring acres and went away.

For being a true woman of the Old West, Wink was named an “Arizona Culturekeeper” by the Arizona Historical Foundation, and she will be one of 100 Arizonans honored during the Centennial Statehood Celebration in 2012.