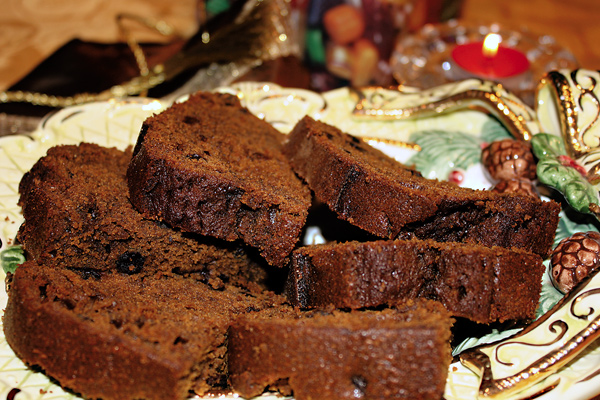 “Inmates of various boarding-houses shudder to think of the vast amount of turkey and fruitcake leftover from the feast of yesterday,” wrote San Francisco’s Daily Evening Bulletin of New Year’s Day dinner in 1873. The reporter added these inmates already know these leftovers will be “occupying a premium position on the dinner-table for several weeks to come.”

Many of us find fruitcake among our holiday leftovers and know all too well that it’s traditional fare at Christmas time and New Year’s. It was also a staple of Victorian Thanksgivings on the frontier.

The Standard of Clarksville, Texas, ran a story on Christmas Eve 1880 that demonstrated just how important the treat was: “Christmas! To-morrow comes the much loved Christmas day.… First: the morning of necessity must open with a nogg of eggs and sugar and something to cook it, so that it will not taste raw then rich fruit-cake comes in course, then a Christmas turkey dressed with fresh oysters, and a little generous wine to wash it down.”

Some housewives prided themselves on making their own fruitcake, while others were simply content to buy theirs from their local merchant. In 1892 fruitcake sold for 50 cents per pound, which today would equal $12.80 per pound, but by 1900 the price had dropped to 30 cents. Merchants began advertising as early as October for their fruitcakes.

In 1882 the Tucson Daily Citizen published this ad: “Fine fruitcake with stoned raisins for Christmas and New Year are at present being made at Rothschild’s Vienna Bakery. Send in your orders early.”

An 1886 Arkansas Daily Gazette advertised, “Fred Rossner of 313 Main Street is having quite a run on his Christmas and New Year fruit-cakes. No Christmas or New Year dinner is complete without the fruit-cake….”

Fruitcake was made early so it had time to rest and the flavors and liquor could be absorbed. Some even likened it to aging a fine wine. The Model Bakery in Helena, Montana, even advertised it like that: “Our fruitcake. Two months old now ready. Just what you want for your Thanksgiving dinner.”

The delicacy was so highly prized by some that they stole it. In September 1860 five boys, whose ringleader was aged 11 years old, broke into Mrs. Ambrose’s confectionery shop on Montgomery Street in San Francisco, California. They stole some spoons, a revolver and a fruitcake! When they were arrested, Officer Blitz recovered everything but the fruitcake, which the thieves had devoured.

You can find several varieties of fruitcake including Parisian, Black, Farmer’s and Poor Man’s. Shared here is an 1879 recipe to make what San Francisco denizens considered to be “good” fruitcake.