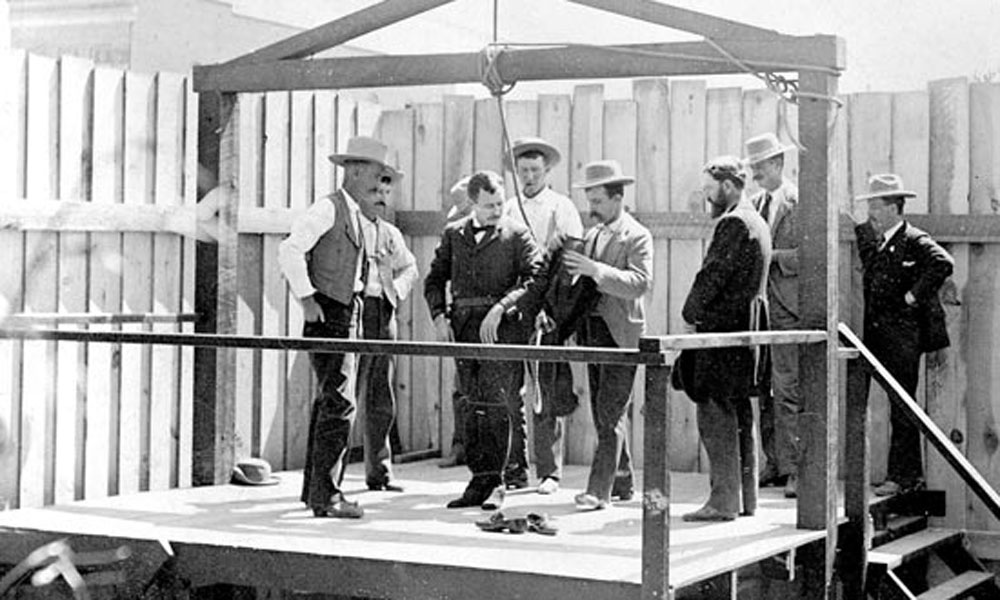 George Ruffner and Fleming Parker had cowboyed together over on the Agua Fria River in their younger days.  As time went by they went their separate ways.  George settled down in Prescott, got married and eventually became one of the town’s leading citizens.  He owned a livery stable and freighting business.  In 1894, he was elected sheriff of Yavapai County.

Parker, meanwhile, fell in with a pretty rough crowd.  He ran afoul of the law in California and did time at San Quentin.  After that he came back to Arizona and settled near Peach Springs.  Parker loved good horses.  That was part of his problem.  Every time he saw a good horse, he wanted it for his own.  One day a Santa Fe train ran over one of his purebred horses.  When pressed for payment, the railroad insisted the horse was overvalued and refused to pay.  Parker decided to take matters into his own hands and robbed a train.  The haul didn’t amount to much.  He’d commandeered the engine and one car but had mistakenly unhooked the Wells Fargo car carrying strongboxes filled with gold coin.

Parker was captured on February 24th, 1897, by his old friend Sheriff George Ruffner.  Because of the alleged highhanded tactics of the railroad, Parker became a local hero.  Many folks, especially ranchers resented unfair shipping rates charged by the railroads and took amusement in the fact that some cowboy had robbed a train.

Public opinion changed quickly when Parker joined two others in a jail break.  In the escape Parker shot and killed the popular assistant district attorney, Lee Norris.  On the way out of town, he stopped by Ruffner’s livery stable and pilfered the sheriff’s favorite horse, Sureshot.

The sheriff was soon hot on Fleming’s trail, tracking him across the mountains into the Verde Valley, up into the mountains again, finally capturing him north of Flagstaff.  Fleming was put on a train and taken back to Prescott.  Along the way, Ruffner learned that an angry lynch mob had gathered at Prescott.  He arranged to get off the train outside of town and come in through the other side.  With his prisoner safely inside the jail, Ruffner, armed with a formidable-looking shotgun, faced the mob and sent them home.

Parker was sentenced to hang on the morning of June 3, 1898.  On the night before the hanging Sheriff Ruffner visited him at the jail and asked if he had a last request.  Parker thought for a moment then said there was just one more thing he’d like to do before he cashed in his chips.  Ruffner asked what that was and Parker wondered if he was acquainted with a young lady over in the “district” named Flossie. The sheriff said he knew the lady. Parker thought it would be nice, with the sheriff’s permission, if she could pay a visit to the jail.  Ruffner said he’d be happy to talk to Flossie and see if she would be willing.

Flossie was happy to oblige, saying she’d be happy to see one of her favorite customers one last time, so Ruffner brought her over to the jail and bid the two good night.

The next morning, at his hanging, Parker had another request.  He asked that Sheriff Ruffner carry out the sentence because he wanted to be assured that the man given the honor of sending him off to the “Long Sleep,” be someone he respected.