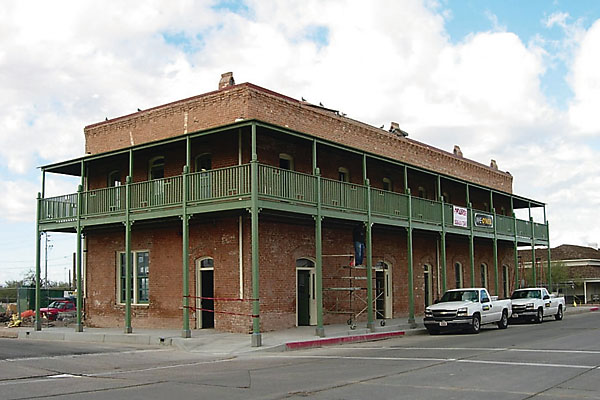 In his teens, in the 1950s, Tom Smith found himself atop the “world’s wonder horse”—or rather, the second Champion.

After a long day at the Junior Parada, singing cowboy star Gene Autry and other ranchers had asked the local teenagers to ride their horses back to the stables.

Riding Autry’s golden Palomino, Tom raced the other boys. “The well-trained horse bowed, and I flew over his head,” he recalls. “I climbed back on…. The horse reared up on his hind legs in true Gene Autry style, and I fell off again.”

Tom lost the race. Later, Autry teased him, “Did you learn how to ride my horse?”

In his retirement years, Tom moved back to Florence. He resides in the historic district and serves as the town’s vice mayor.

To this day, he remains a big fan of the Junior Parada, held every Thanksgiving weekend since 1932. He says it is the town’s most popular event, drawing in youth from neighboring states to compete in the rodeo.

Here are some more of his favorites at this locale that began in 1866 as a food/hay stop between Forts McDowell and Lowell.

Good Cowboy Bar: Gibby’s Bar and Grill (301 N. Main) is in an old adobe building with a vintage back bar.

Historic Site Most of the Schoolchildren Visit: The first adobe Pinal County Courthouse, built in 1878.

Avg. Temperature: Winter, 50s-70s. Summer, 100s. We do not sleep on cots out in the street like the pioneers did (we have air conditioning).

Who knows Florence’s history best? John Swearengin, the honorary town historian, who has written his memoirs of life in Florence and a book called Good Men, Bad Men, Law Men, and a Few Rowdy Ladies. At over 80 years of age, he still gives walking tours of Florence.

Who does everyone in Florence know? Art Celaya, my Spanish teacher and assistant football coach back in the 1950s. He’s probably taught or coached most long-time residents of the town.

Best-Kept Secret: The 13-foot high rock pyramid atop F Butte, north of the Gila River. Underneath that pyramid lies the remains of Charles D. Poston. His reputation was sealed as the “Father of Arizona” when he convinced Abe Lincoln to separate Arizona from New Mexico.

Current Preservation Project: The Silver King Hotel; its reconstructed balconies have already helped to bring the building back to its 1895 roots.

What is the latest gossip? We’re all dishing about the headliner for Country Thunder, the Country-Western music festival held at Moon Valley Ranch, northeast of Florence, the first week of April. So far, folks say Tim McGraw.

Special thanks to Tom Smith, vice mayor of Florence, Arizona, and a retired supervisor from U.S. Airways, for sharing his love of the town with us.