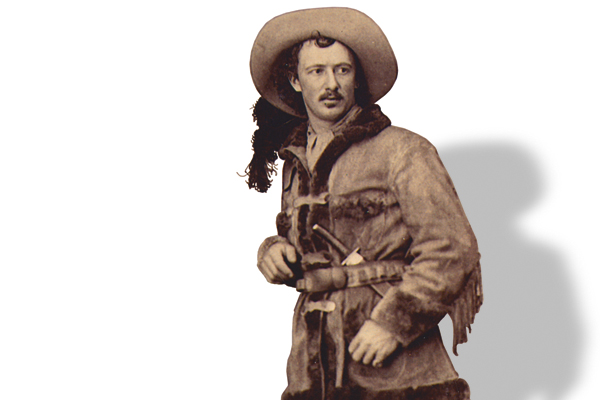 They came out in droves for William F. Cody’s funeral back in 1917.

Some 25,000 folks passed through the capitol rotunda in Denver, Colorado, where his body lay in state, and afterward Buffalo Bill was hauled off to a crypt for five months before being planted atop Lookout Mountain in nearby Golden.

Thousands of folks still pay their respects to Buffalo Bill. By jacks, you can hardly escape his legacy in metropolitan Denver, whether you’re sipping a beverage at the Buckhorn Exchange or visiting his grave and museum on Lookout Mountain.

But what about John B. Omohundro?

His body lay in state, but in the Tabor Opera House over in Leadville, after the legendary “Texas Jack” died of pneumonia on June 28, 1880, at age 33. Newspapers lamented the passing of this “cool, intrepid Indian fighter, government scout and ranchman,” this newspaper correspondent, bartender, actor, schoolteacher and Confederate cavalryman, this cowboy, hunter and guide, this star of dime novels and pard of Buffalo Bill and Wild Bill Hickok. But his funeral drew far fewer than 25,000.

Denver bookstores are full of titles about Buffalo Bill while Texas Jack’s one biography is long out of print. Cody has excellent museums in Colorado, Wyoming and Nebraska, and even got to be played by Paul Newman and Charlton Heston in movies. (True, both movies stink.) Texas Jack? Well, there is a cool store named after him in Fredericksburg, Texas, and a website (www.texasjack.org).

That’s what I’m thinking as I make my way out of Denver/Golden to Leadville. OK, I’m also thinking, Will I get to Leadville alive? After all, it’s snowing and the roads are icy. Texas Jack died of pneumonia, a common ailment for high-altitude cities, back then. Which makes me think, Who in their right mind would run races in Leadville?

Leadville’s summer calendar, you see, is full of races, attracting hearty cyclists and runners. I start to wonder if I should have driven up here in June, and not January. Then I realize maybe I should stop thinking and concentrate on staying out of snowbanks.

Back to that calendar. Nothing on it heralds John B. Omohundro—a member of the Tabor Light Cavalry; a man who, legend has it, thwarted a stagecoach robbery outside of town; and a man married to the dancer who brought the can-can to America! And what is his reward?

At first glance, Leadville ignores poor Texas Jack. This is the town of Doc Holliday, of the Matchless Mine, of Tabors and the Healy House and Dexter Cabin. But I soon find historical markers noting brave Texas Jack, plus the well-preserved Tabor Opera House, and eventually, I slide over to snow-buried Evergreen Cemetery.

Texas Jack isn’t totally forgotten. And we can thank his old pard.

“My friends,” Buffalo Bill said in 1908 as he stood near where I stand in 2005, “perhaps many of you do not know this man whom we have gathered to honor…. Instead of this board which now marks his grave, we will soon have erected a more substantial monument, one more worthy of a brave and good man. May he rest in peace.”

A granite marker stands over his grave now. Well, I’m told one stands here, underneath all this snow. I mean, this is January at 10,000 feet.

I am comforted. Texas Jack is resting in peace—and remembered—in Leadville. And I’ll feel even better once I dump snow out of my cowboy boots.