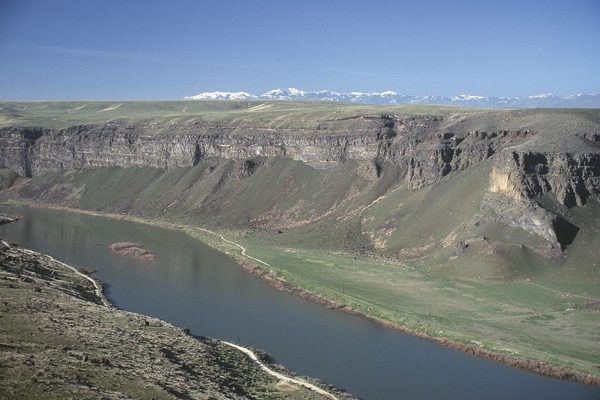 In the 1840s when emigrants on the Oregon Trail stood at South Pass, they knew their journey was half over.

Recalling the places they’d already seen—the Missouri River, Chimney Rock, Scotts Bluff, Fort Laramie and Independence Rock—the earliest travelers had no idea of the difficulties they had yet to face before reaching their destination.

By the time they got to Fort Hall
(in today’s Eastern Idaho), many be-lieved the hardest part was behind them. But soon after leaving the fort in their dust, they realized more obstacles stood in their path before they would see Oregon City and the Willamette Valley.

Today, the trail from Fort Hall, Idaho, to Oregon City, Oregon, is followed by traveling on Interstates 86 and 84, though at times you’ll need to exit the freeway to see trail sites. For the pioneers, it took about eight weeks to cover the same distance. By car, you can do it in less than eight days, depending on how many side trips you take. Across Idaho the route follows the Snake River.

Most of the country is a barren waste.

Many other emigrants echoed Hastings’ sentiment as they paralleled the Snake River from Fort Hall to Farewell Bend. Certainly not all of Idaho—then or now—could be called a barren waste. Although in the summer when Oregon-bound emigrants crossed this land, it was often hot, dusty and dry, there were places where it was downright beautiful. Today, as you follow the Oregon Trail, you’ll be traveling through a fertile agricultural valley, made possible by widespread irrigation.

Civilization has brought about other changes, as well. The American Falls Reservoir flooded the drop after which it was named. But on July 5, 1849, James Pritchard noted:

We passed the great American falls. The fall must be 40 to 50 feet in about 70 or 80 yards. . . . The roaring of the waters can be heard for many miles. They rush with great velocity over and through the vast lumps that lay in massive piles in the channel.

A few miles farther west, the emigrants passed Massacre Rocks, where the trail was so narrow the wagons had to pass single-file. The area gained its name (The name was dreamed up in 1927 by local businessmen who wanted to boost tourism.) because of Indian attacks on two small wagon trains in 1862. Today, the site is a state park. At the Raft River, California-bound travelers departed from the combined Oregon-California Trails as they headed toward the Golden State. When you reach Twin Falls,  leave the freeway to drive the Thousand Springs Scenic Byway (U.S. 30), where you’ll see waterfalls cascading out of the lava rocks, just as the pioneers did.

Near modern-day Glenns Ferry, most emigrants crossed to the north side of the Snake River, then pushed northwest toward the Boise River.

To Snake River—crossed very deep to hind wheels—7 yoke to a wagon.

There were two different crossings the emigrants used to traverse the Snake: Three Island Ford and Two Island Crossing a mile upstream.

The river is divided by two islands into three branches, and is fordable. . . . The last branch we rode as much as half a mile in crossing and against the current too, which made it hard for the horses, the water being up to their sides. Husband had considerable difficulty in crossing the cart. Both cart and mules were turned upside down in the river and entangled in the harness. The mules would have been drowned but for a desperate struggle to get them ashore. Then after putting two men swimming behind to steady it, they succeeded in getting [the cart] across.

The crossing was no easier 15 years later.

We forded the Snake River, which runs so swift that the drivers (four to a team) had to hold on to the ox yokes to keep from being swept down by the current. The water came into the wagon boxes, and after making the island we raised the boxes on blocks, engaged an Indian pilot, doubled teams, and reached the opposite bank in safety.

Each August you can see how challenging it was for travelers to ford the Snake when re-enactors hitch their wagons to oxen, horses or mules and plunge across. The Three Island Crossing celebration at Three Island State Park also includes blackpowder shoots, pioneer arts and crafts and musical entertainment.

While most pioneers accepted the risks of fording the Snake, some remained south of the river, following an alternate route. That trail was rough and dry, so the choice was not an easy one.

August 9: This day we traveled five or six miles to the river where we remained all day. Made several attempts to swim our cattle, but without success.

August 10: This morning we finally abandoned the idea of crossing the river; gathered up our cattle, hitched up our teams and took the sand and sage for it.—Cornelia A. Sharp in 1852

From Three Island Crossing the main branch of the Oregon Trail headed north to the Boise River and Fort Boise, a trading post established in 1834 by the Hudson’s Bay Company. Built of wood and covered with adobe, Fort Boise was damaged by flooding in 1853. Ten years later the U.S. Army established a military garrison named Fort Boise 43 miles farther east near today’s Boise, Idaho.

In the waning years of trail travel across Idaho, emigrants and Indians occasionally shot at each other, but in the trail’s early years, the Native Americans provided assistance to the travelers. “Bought a salmon fish of an indian [sic] today weighing seven or eight pounds[;] gave him an old shirt some bread and a sewing needle,” Lydia Allen Rudd noted in 1852.

As the Snake River turned north in what is now Eastern Oregon, the pioneers veered northwest, calling the place they left the river Farewell Bend. Ahead were mountains, the first mountains they had encountered in 350 miles; I-84 crosses them too. The last 450 miles of their journey would test their endurance and persistence.

Though emigrants didn’t call the 3,684-foot summit they climbed near today’s Baker City, Oregon, Flagstaff Hill, they did leave behind deep ruts, both ascending and  descending. Today, you can easily find the ruts and walk in the same pathways as the pioneers by visiting the National Historic Oregon Trail Interpretive Center.

Operated by the Bureau of Land Management, the center focuses on American Indians, mountain men, life on the Oregon Trail, natural history, mining and early settlement. Inside you’ll see life-size dioramas of pioneers, oxen, mules, wagons and campsites. Outside, a 4.2-mile trail takes you close to the wagon traces.

After descending Flagstaff Hill, the emigrants crossed a flat valley before beginning the long pull up the Blue Mountains west of present-day LaGrande. Reaching the pass, known now as Deadman Pass, was a strain on themselves and their animals and was often made more difficult by the weather.

In passing across the mountains we were overtaken by a snow storm which made the prospect very dismal. I remember wading through mud and snow and suffering from the cold and wet.

Upon descending the pass, some emigrants continued west while others turned north for the Whitman Mission and much needed supplies.

In 1835, when Narcissa Whitman and Eliza Spalding rode horses across the route that became the Oregon Trail, they demonstrated that white women could  make the journey to Oregon.

Narcissa and her Presbyterian, missionary-doctor husband, Marcus, established the Waiilatpu Mission on a bend of the Walla Walla River (in today’s Washington state) in 1836. By 1844 the mission’s farm and sawmill attracted many emigrants to visit and purchase supplies.

In the fall of 1847, a measles epidemic swept the mission. Over half of the Cayuse children who became ill died in spite of Dr. Whitman’s efforts to save them. When Indian children died in greater proportion than did white children, the Indians seethed. On November 29, 1847, the Indians attacked the mission, killing Marcus and Narcissa, among others.

The events at the Whitman Mission led to territorial status for Oregon. The mission was never re-established.

Once the mission had become defunct, travelers stopped at the Umatilla Indian Agency, and after 1855, they went to the Fort Henrietta Military Stockade for what limited stores and assistance they could find. Beyond here the dry and dusty trail led to the John Day and Deschutes Rivers, then crossed Echo Meadow where temperatures often reached 100 degrees. Today, you can still see the deep swales left in the sandy soil by pioneers.

Trail ruts mark the hills above the John Day River, and McDonald Ford is still visible. The trail now winds toward the Columbia River, topping out on a ridge high above the waterway, where travelers could see snow-capped Mount Hood. Following the wide Columbia, the pioneers headed toward The Dalles.

Methodist missionary Daniel Lee started his ministry at The Dalles in 1838. In May 1850, the U.S. Army opened a post there known as Camp Drum; it became Fort Dalles in 1853.

Loaded up our boat and left. Paid $17 for freight and passage. . . . Came down about fifteen miles and landed. We buried a child which we found upon the bank of the river, drowned.

From The Dalles, emigrants could either float down the Columbia—perhaps using a hand-built raft or an Indian canoe—or they could take their wagons over the Cascade Mountains. The earliest travelers chose the river. After 1845 when Samuel K. Barlow and Joel Palmer blazed the Barlow Toll Road over the Cascades, travelers could continue overland with their wagons. In either case the way was difficult and often expensive. By comparison, today’s drive down I-84 with the Columbia flowing alongside is a breeze.

You can bet that just like kids today, pioneer children were whining, “Are we there yet?” before the journey’s end. Six months after they had loaded their wagons somewhere east of the Missouri River, the emigrants reached the “end of the trail” in Western Oregon at a place they soon named Oregon City. Many continued to other points in the Willamette Valley, or headed north into today’s Washington state.

The Willamette Valley wasn’t the utopia they had expected. As Marilla R. Washburn Bailey wrote of her arrival in 1852, “My most vivid recollection of that first winter in Oregon is of the weeping skies and of Mother and me also weeping.”

You’ll know you’ve reached the trail’s end when you see three oversized wagons in a semicircle. That is the End of the Oregon Trail Interpretive Center where you can learn about the lives the pioneers forged for themselves in the Pacific Northwest. Park your car, release the rug rats from their back-seat prison, and view the center’s exhibits, which include information about fur traders as well as the Oregon Trail pioneers.

Candy Moulton is the co-author of Wagon Wheels: A Contemporary Journey on the Oregon Trail.