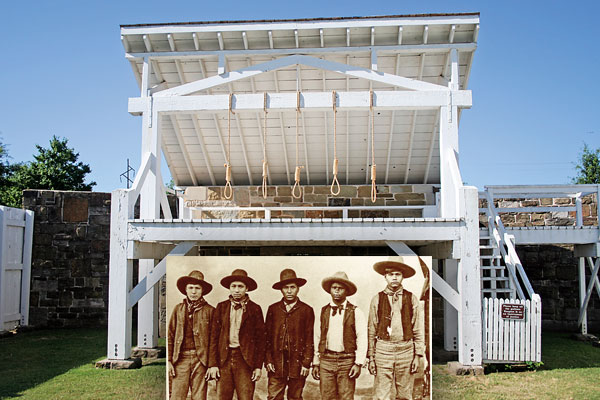 The good judge, though, begged to differ. “I never hung a man,” he told a St. Louis Republic reporter. “It is the law.”

Parker, who presided over the Federal Court of the Western District of Arkansas in Fort Smith for more than two decades, personally favored the abolition of capital punishment and never witnessed an execution.

But putting his private misgivings aside, he sentenced outlaws Crawford Goldsby (“Cherokee Bill”), Rufus Buck and many others to hang by their necks until dead. (Only about half of those he sentenced were actually hanged.)

Bass Reeves was a mild-mannered, soft-spoken man and something of a snappy dresser. He was also one of the toughest lawmen in history. In the course of his 32-year career, Reeves arrested more than 3,000 felons. He also killed 14 outlaws, but always claimed “he never shot a man when it was not necessary….”

Reeves, born a slave in 1838, had fled to the Indian Territory (now Oklahoma) during the Civil War. Thanks to his familiarity with the land, knowledge of Indian languages and his deadly rifle and pistol skills, he was recruited into the Marshals Service, one of the first black men to serve as a deputy marshal west of the Mississippi River.

For a memorable welcome to Fort Smith, stop by Miss Laura’s Social Club. The two-story building, purchased by Laura Ziegler in 1898, was known for years as the area’s premier sporting house. As the town’s visitor center, it provides hospitality of a tamer kind.

Be sure to check out the “Hell on the Border” jail and the replica gallows at the Fort Smith National Historic Site.

The Fort Smith Museum of History holds a birthday party for Judge Parker every October, complete with cake, ice cream and a shoot-out.

Enjoy the antique furnishings and lovely garden at the stately, brick Beland Manor Inn B&B, designed after a turn-of-the-20th-century home.

Old Fort Days Rodeo has been a Fort Smith tradition since 1933, when it was called the “Pawnee Bill Rodeo.” It begins every Memorial Day.