This eerie last message, written by Lt. William W. Cooke on June 25, 1876, under orders from Lt. Col. George Armstrong Custer and delivered by Custer’s orderly, Trumpeter John Martin, has inspired military students and Old West buffs to debate tactics, weaponry and virtually every aspect of the Battle of the Little Big Horn for the past 140-plus years.

With literally hundreds of guns used during that fatal encounter between the 7th U.S. Cavalry and Sioux and Cheyenne warriors, only 17 can definitely be attributed to this, the most pivotal battle of our frontier experience.

Among the few firearms positively identified by modern forensics—matching fired casings or bullets to the actual gun, from cartridge casings and lead projectiles found in various sections of the battlefield—is the Springfield .45-70 carbine, which could be considered the most important arm. It reveals strong evidence that this carbine belonged to Pvt. John Martin (aka Giovanni Martino) who was a trumpeter (bugler) assigned to serve as Custer’s orderly on the day of the battle.

Martin’s carbine is a 1st Model Springfield, serial no. 19573, with the long thin wrist, stacking swivel on the barrel band and no trapdoor in the butt plate for cleaning tools and a broken shell extractor. It is a nice example of an early 1873 Springfield carbine, despite its age and a couple of minor alterations.

The carbine’s general condition does not offer evidence of having been captured by Indians and shows normal wear for a weapon of its age. One apparent modification is that the gun once had a sear let-off screw installed, but it was later removed and the hole in the stock has been filled with lead. The carbine is also missing its hammer screw, and the carbine sling ring has been removed from the bar—a feature often encountered with other military arms that perhaps fell into the hands of Indians or Anglo civilians, since such an appendage would not be needed.

There is convincing evidence that this was Trumpeter Martin’s carbine. First, there were only two troopers named J. Martin in the 7th cavalry at the time of the Battle of the Little Big Horn. One was a Cpl. James Martin in Company G, who was killed during Reno’s retreat from the valley fight. The only other J. Martin was John (Giovanni), who was the trumpeter in Company H. It’s obvious that the name  “J. MARTIN,” was hand-carved into the left side of the forearm long ago, coupled with the letter “H,” also hand-carved into the left side of the stock, several inches from the butt plate, offering credence to the belief that this carbine belonged to Company H’s Trumpeter John Martin.

Adding to the carbine’s credentials is a .45-70 cartridge case that perfectly matches the carbine and, ironically, was uncovered on Last Stand Hill, although Trumpeter Martin had left the battlefield early on and was not present at that site. Once he delivered his fateful message, he joined up with Benteen and survived the fight, living to the age of 70. However, it is quite possible that as he was hurriedly leaving the field, Martin gave his carbine to a fellow trooper, due to the brittle copper-cased cartridges jamming of many of the weapons, or perhaps it was dropped on the way to Benteen’s command. While this historic Custer battle Springfield certainly has the earmarks of having been Trumpeter John Martin’s weapon, it will remain a question for Custer aficionados to debate for all time. This writer, for one, is convinced that this was indeed John Martin’s carbine. 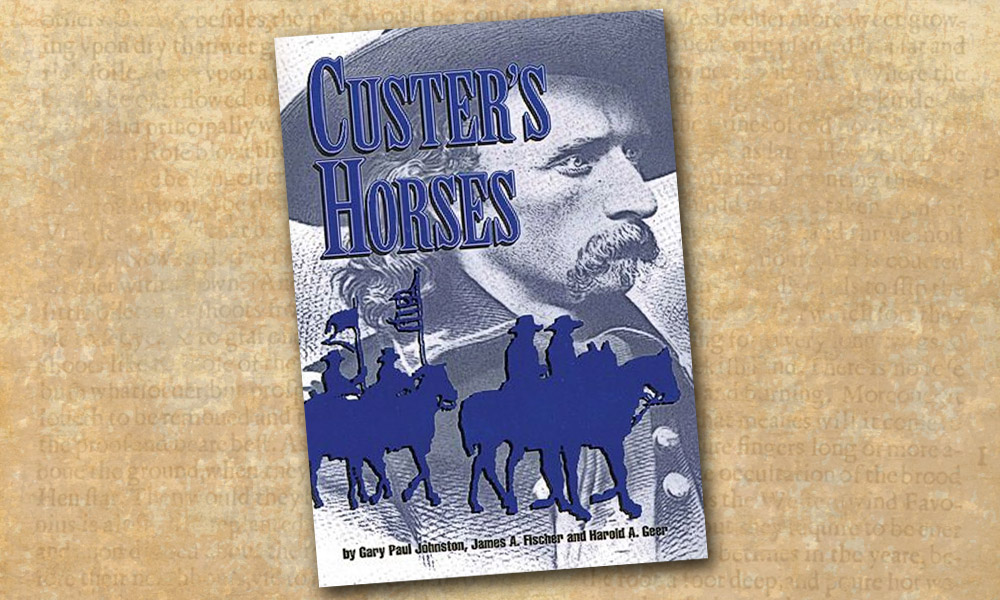 Unlike other works on the Battle of the Little Big Horn, Custer’s Horses by Gary Paul Johnston, James A. Fischer and Harold A. Geer (Wolfe Publishing, $15.77, 145-page soft cover volume) focuses on the condition of the horses in the 7th Cavalry, and the general care of military animals during the Indian Wars.

Interviews with soldiers and Indians—along with a reprinting of a little-known 1941 study of the 1876 Sioux Campaign by Lt. Col. Elwood L. Nye, Veterinary Corps, U.S. Army, a detailed recounting of the day-by-day travel and conditions that the men and animals endured in those final weeks that led to the fateful fight in Montana—gives evidence that the exhausted condition of both man and beast seriously affected the cavalry’s performance during the final clash. This is a fascinating read.