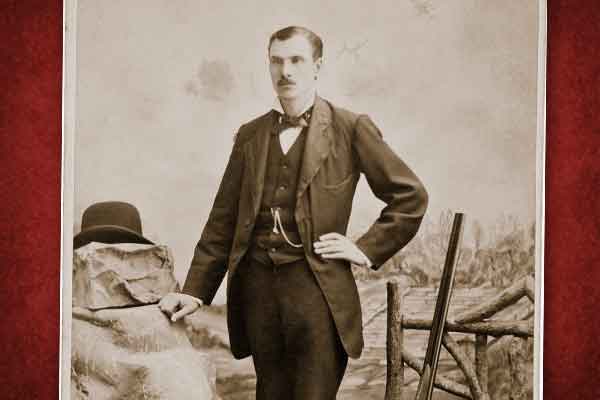 Frank Butler, Annie Oakley’s husband, has to be one of the most unjustly maligned figures in the American West. Films portray him as a philandering cad, jealous of his wife’s skill with firearms and capable of resorting to pathetic and destructive measures to assert his manhood.

In 1935’s Annie Oakley, Frank doesn’t even get to use his own name. As Toby Walker, he wounds Annie while shooting a coin from her hand and temporarily puts her out of business.

In 1950’s Annie Get Your Gun, the womanizing sharpshooter proves to be a “big swollen headed stiff” with traditional ideas of a woman’s role and intense jealousy of Annie’s success.

In 1976’s Buffalo Bill and the Indians, Frank is a philandering featherweight who serves as a trembling target while Annie shoots coins from his hand and cigars from his mouth.

These portrayals grossly insult the memory of a man who, in many ways, was well ahead of his time.

Born in Ireland in 1852, Frank worked his way across the Atlantic to America. He eventually became part of a shooting act with partner Baughman and a poodle named George. Employed by the Sells Brothers Circus, Baughman and Butler were in Cincinnati, awaiting the start of the season, when Frank accepted a challenge from some Fairmount farmers to shoot against a local sharpshooter.

That shooting match with Annie Moses (or Mosey) became legend. The targets were live birds, 25 apiece. Frank scored 24 kills, while Annie won the match with 25.

If Frank felt any shame at losing, it is lost to history. After a romance facilitated by Annie’s fondness for Frank’s dog, the two were married (she claimed on August 23, 1876; a marriage certificate supports Frank’s date of June 20, 1882). In 1882, Annie adopted the stage name Oakley, and the act turned into Butler and Oakley.

Surprisingly, given the mores of the late 19th century—women couldn’t even vote, except in a few states—Frank seemed unthreatened by Annie’s success. As her advance man, press agent, travel agent, financial manager and stage extra, he more than pulled his weight, while he cheerfully ceded the limelight to his wife. He didn’t drink, smoke or gamble, and, by all accounts, was a faithful husband.

In 1885, the couple signed on to Buffalo Bill’s Wild West exhibition. For most of the next 16 years, they successfully toured America and Europe with the troupe.

Even by modern standards, Frank put up with plenty of abuse. In Britain, Annie was wined and dined by nobility, while Frank, on at least one occasion, was mistaken for her butler, a humiliating error that he laughed off. She received marriage proposals from adoring fans unaware (or uncaring) of her marital status. The king of Senegal approached Buffalo Bill Cody—not her husband—with an offer to purchase Annie to help exterminate tigers plaguing his villages (Cody, to his credit, refused). Frank seems to have endured all this with grace, humor and patience.

The marriage lasted until their deaths in November 1926. Apparently Frank, upon learning of Annie’s death, simply stopped eating. He survived her by 18 days.

Daniel R. Seligman is a retired engineer who lives in Needham, Massachusetts. Do you know about an unsung character of the Old West whose story we should share here? Send the details to editor@twmag.com, and be sure to include high-resolution historical photos.