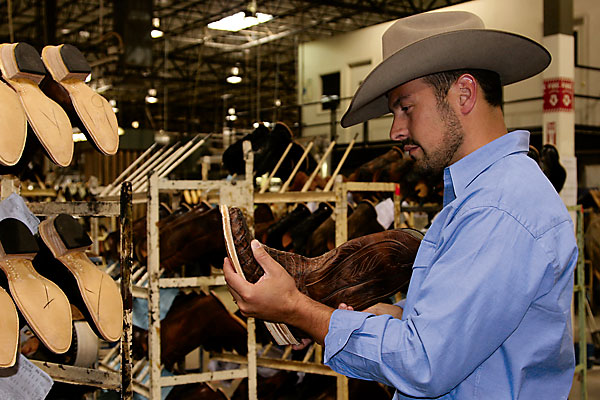 The most expensive boots ever were a pair we made out of American Alligator, sporting gold leaf inlays with diamonds and rubies and going for $45K. I don’t think you’d want to rustle any cattle in those babies.

Lucchese lasted 125 years thanks to the appreciation and dedication for impeccable artisan craftsmanship and keeping it domestic, allowing us to control and maintain that craftsmanship and high quality standards as a company all around. Some of our most talented and skilled handmade boot makers have been with us for many years.

My favorite pair of boots is a pair of Lucchese Hornback Lizard centennial boots that were made in 1983. They are displayed in our office in El Paso.

A competitor’s boots I wear? Are you serious? Well, if I must, I guess they’d have to be my Salomon ski boots.

My friends say I am genuinely a nice guy—because I’m always smiling—and genuinely not a great golfer.

The worst product I ever saw was at Denver’s Western Wear Show. The amazing contraption was a collapsible Boot Jack made of rubber bands. Just use your imagination.

Before Lucchese, I worked for four years as an Internet Sales Manager at El Paso Honda.

In Belgium, one should always know exactly where you are going and definitely know some French. Buffalo Bill must have spoken some French during his European tour with his Wild West Show. I haven’t heard any stories of him getting lost in Belgium.

One person I just can’t seem to get away from is Neal McCoy. At every concert, no matter where, he always stops in the middle of a song and says: “Look at my Lucchese boots. Where’s Fred?”

In my free time, I bond with my dad and help restore a little bit of American history—my cars. I’m proud of my two faves—a 1969 Firebird and a 1949 Packard. Also, I seem to recall hearing about an old photograph of Wyatt Earp posing next to a Packard.

Texas cowboys are more well versed in Western fashion wear than one would think. They constantly take it to the next level, always letting us know exactly what they’re looking for in the cut, style, color of shirts, jeans and boots—you name it. They want the best, and they let you know it.

The greatest innovation in boot craftsmanship was Sam Lucchese’s Twisted Cone Last—makes your foot feel like it’s in a sock.

Karl “The Mailman” Malone’s boot size is 24 D, but topping that is the pair we made for Andre the Giant measuring in at 26 D!

What history has taught me is to handle each situation with tact, as your true colors come out when you’re exposed and under pressure. So I always remind myself …“this too will pass.”
Fred King, Marketing Director for Lucchese Boot Co.

Fred King is the marketing director for the Lucchese Boot Company in El Paso, Texas, which is celebrating its 125th anniversary this year. King’s appreciation for fine craftsmanship must come naturally, as his hobby is restoring old cars, particularly his 1949 Packard (similar to one frontier lawman Wyatt Earp once posed by).

Fred King is the marketing director for the Lucchese Boot Company in El Paso, Texas, which celebrating its 125th anniversary in 2008. King’s appreciation for fine craftsmanship must come naturally, as his hobby is restoring old cars, particularly his 1949 Packard (similar to one frontier lawman Wyatt Earp once posed by).