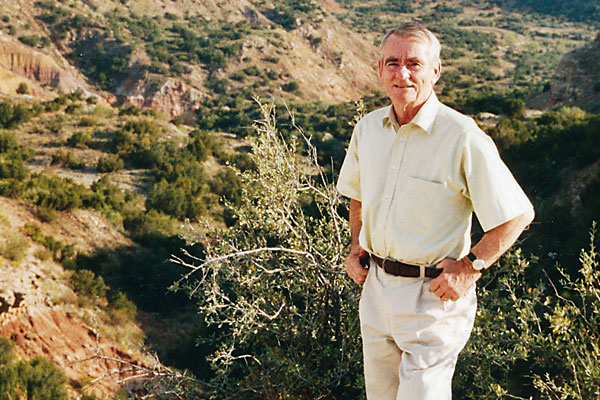 Digging up Billy is a fascinating idea, and if they ever do it, I want to be there. But it will never happen because it’s impossible to be certain exactly where in that Fort Sumner cemetery he is buried.

Another love of mine most don’t know about is the history of popular songs in America from Stephen Foster to the present day. In fact, I taught myself to play the piano so I could get other people to love them too.

Don’t even get me started on Broadway musicals, or you’ll think you’ve run into the Ancient Mariner.

When I was a kid people said, “You ought to be on the stage.”

The most frustrating thing about researching Billy the Kid is figuring out where he was and what he did during the last 77 days of his life.

British Westerns are no longer commanding automatic 250,000-copy sales like the ones I wrote as “Frederick H. Christian” in the 1960s, but there is still a healthy readership through public libraries and in large-print editions. Surprisingly, there’s an active collector’s market, too, with paperbacks that originally sold for about 25 cents now fetching anywhere between $50-$70.

One of the least known facts about the Lincoln County War is that Billy the Kid not only wrote a letter to Sallie Chisum on July 19, 1878, the day of the Big Killing, but—even more surprising—it got delivered (bravo, the U.S. Mail!).  Now that would be a document worth finding!

When people say they are related to Billy the Kid, I always listen. It doesn’t matter how barmy their story is, I listen, because one of these days, someone may come along who actually is, and can prove it, and I wouldn’t want to be the schmuck who told him (or her) to get lost.

I’m most proud of being married to Heidi Nolan.

The best advice anyone ever gave me came from Eugene Cunningham, the author of Triggernometry. I felt I understood Billy the Kid better than most because I was (then) a year older than he had been. Gene said, “If you ever come to understand Billy the Kid—and I did say if—the one thing you can be absolutely sure of is that it will not be because you’re the same age.” Fifty years later, I can tell you: He was right.

It really grinds me when people ask me how ever did an Englishman become interested in Billy the Kid? Is it really so hard to comprehend?

Frederick Nolan, author of The Billy the Kid Reader

A British editor and writer, and co-founder of the English Westerners Society, Nolan is the foremost authority on Billy the Kid and has edited a collection of the best articles on the Kid, The Billy the Kid Reader, published by the University of Oklahoma Press.