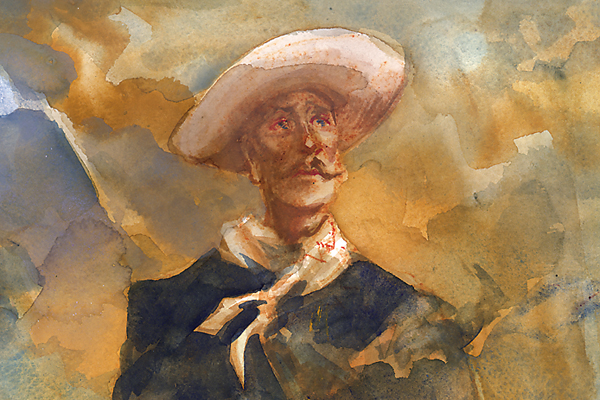 He asks for “his fair cut” from a game of Monte just finished. In his cups, Sterling strikes Ben across the face. As a fight breaks out, policeman “Happy Jack” Morco, who was talking with Sterling when Ben approached, pulls two revolvers and forces Ben to back off. Grabbing Sterling, Morco guides him out of the saloon.

Ben goes back to Brennan’s Saloon (site of the original Monte game) and is telling a Texan friend about his altercation when a shout from outside is heard: “Get your guns, you Texas sons-of-bitches and fight!” It is Happy Jack Morco with two drawn pistols and Sterling armed with a shotgun.

Ben begs his friends to loan him a firearm but they refuse, so he ducks out the back door of Brennan’s and makes for Jake New’s place where he checked his guns earlier. Stuffing his revolver in his belt, Ben loads his Winchester and steps out onto S. Main Street. As he does, his very drunk younger brother, Billy, joins him, having grabbed Ben’s double-barreled shotgun.

Cocking both barrels, Billy staggers, and just as Ben warns him to be careful, one of the barrels goes off, striking the sidewalk in front of New’s saloon, at the feet of Texas drovers Seth Mabry and Eugene Millett.

Ben grabs the shotgun away from his brother and tries to extract the cartridges, but they are brass and swollen. He hands the shotgun to someone else and steps into the street. Determined to make a stand with his brother, Billy retrieves the shotgun and follows Ben. Looking down Snake Row to where Sterling and Morco are standing, Ben bellows, “If you sons-of-bitches want to fight us, here we are!”

Across the plaza, on the opposite side of the tracks, Sheriff Chauncey B. Whitney is enjoying a meal with John “Long Jack” DeLong at Veatch’s Hotel and Restaurant. The sheriff stayed in town instead of going on a picnic with his family. The sister of his wife, Nellie Henry, was being courted by John Montgomery, editor of the Ellsworth Reporter, who had informed the sheriff that he may want to stick around because Billy was on a bender that day.

Hearing the report of the shotgun, the unarmed sheriff leaves the restaurant, with Delong behind him. Stepping across the tracks, he calls out, “Boys, don’t have any row. I will do all I can to protect you. You know John and I are your friends.”

Trying to calm down the Thompson brothers, the sheriff offers, “Come let us go to Brennan’s and take a drink.” Both Whitney and Ben ask Billy to let down the hammers on the shotgun, but Billy will not comply, saying, “I’m not going to let those damn sons-of-bitches get the best of Ben.” He does, however, promise to ease off the hammers once he reaches the saloon.

Walking across the plaza, the men reach Brennan’s. As they enter, a Texas stockman, W.A. Langford, yells out a warning that Morco is advancing down the boardwalk with a pistol in each hand. Ben spins around, brings his Winchester up to his shoulder and fires at the rapidly approaching Morco, who dives into the entrance of Beebe’s General Store. The bullet hits the door casing, missing Morco.

Coming out on the boardwalk, Sheriff Whitney steps forward, asking, “What does all this mean?” Behind the sheriff, Billy staggers out of the saloon. As he tries to recover himself, the shotgun goes off, striking the sheriff in the right side (chest area).

“Oh, I am shot!” Whitney cries as Ben Thompson screams, “My God, Billy, you have shot our best friend!”

Bystanders crowd around the mortally-wounded sheriff, who says, “He did not mean it. It was accidental, send for my wife and baby.”

The fight that never came off is over, but this is where a dubious legend begins.

Late in life, Wyatt Earp told his biographer Stuart Lake that he watched with disgust as Billy Thompson rode out of town after killing Sheriff Whitney. Earp said he accepted the city marshal badge from Mayor James Miller and borrowed a pair of used six-guns from Beebe’s General Store. Then he boldly walked across the Plaza, under the guns of countless Texans, and placed Ben Thompson under arrest, ending the standoff and preventing further bloodshed.

Before the 1931 publication of Wyatt Earp: Frontier Marshal, not one word about Earp’s involvement was ever published. The Ellsworth Reporter, the town’s sole newspaper, reported extensively on the shooting and its aftermath, yet it never mentioned Earp. Earp’s alleged arrest of Ben was never mentioned in the paper’s reports of Billy’s nine-day trial, nor was Earp on the trial’s witness list. And the minutes of Ellsworth’s city council meetings didn’t have an entry stating Earp was sworn in.

Earp worshippers still trot out the venerable old-timers who, being interviewed after the publication of the book, suddenly remembered Wyatt being there.

Of all the Earp claims, this one is the most dubious.

Four Jacks and a Joker

“Nobody Killed Yet” proclaimed the Ellsworth Reporter in its July 3, 1873, issue. With the Texas cattle season  in full swing, the editor and the residents of Ellsworth were beaming proud, or perhaps just nervously optimistic.

By most accounts, Morco was a swaggering illiterate, a self-described Indian fighter and gunman, who claimed to have shot a dozen men. In June, Morco arrested Billy Thompson for assaulting him, carrying a deadly weapon and disturbing the peace (it was Billy’s second arrest and he paid a heavy fine). Morco definitely reserved a special hatred for the Thompson brothers, which came out that day on Snake Row.

Having lost his pistol and money after sleeping off a visit with Mollie Brennan, Billy Thompson rode back into town, where his older brother Ben and others dressed him as a vaquero and snuck him out to a cattle outfit, back to Texas. With a $500 reward on his head, Billy remained on the dodge for three years until the Texas Rangers rounded him up. He was extradited to Kansas, declared not guilty in 1877 and returned to Texas. His name doesn’t crop up again until the summer of 1880, when he gets in a shoot-out with Texan Jim Tucker in Ogallala, Nebraska.

After he was shot, Whitney suffered in agony for three days, dying on August 18. His body was buried under the auspices of the Masonic order, in the Episcopal Church cemetery, within sight of the backyard of his house.

Ben Thompson’s 12-gauge, breech loading, centerfire shotgun was a gift from Texas cowboy Cad Pierce. Ironically, an Ellsworth police officer shot and beat Pierce to death two days after the Whitney shooting, when Cad had confronted lawmen about rumors of all Texans being ordered out of town. Ben eventually pawned the shotgun to Chalk Beeson of Dodge City for $75. (Today, the scattergun is prominently displayed at Front Street’s Boot Hill Museum in Dodge City.) Ben’s next brush with the law doesn’t take place until Christmas night in 1876 when a fight erupts at a theatre in Austin, Texas.

Two Ellsworth policemen were killed not long after the fight: “Happy Jack” Morco, fatally shot by J. Charles Brown (who would later become a city marshal), and Edward Crawford, gunned down by a Texas cowboy, who, rumor has it, may have been Cad’s brother-in-law (Crawford was the lawman who had beaten Cad to death).