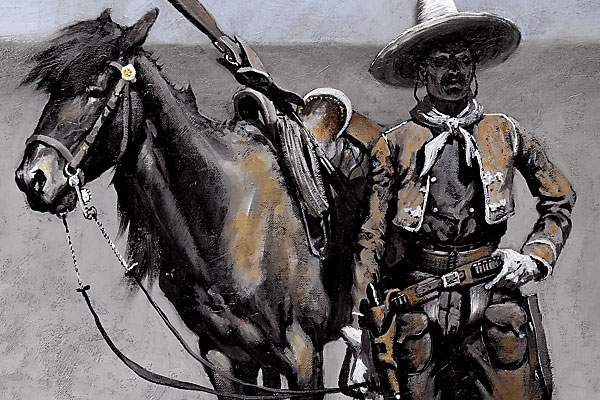 “He is ever a picturesque figure, whether in groups or dismounted and standing alone on the great prairie, watching the train flash past him, broad-hatted and clad in buckskin pants, with many little fringes down their seams.”
– Lee C. Harby passage accompanying Remington’s Mexican Buckaroo in Texas illustration in the July 1890 issue of Harper’s New Monthly Magazine

If you haven’t noticed, cowboy apparel and cowboy lingo are replete with Spanish influences. This makes sense since nearly half of the American West was acquired from Mexico by annexation (Texas, 1845), by war (the Mexican Cession, 1848) and outright purchase (Gadsden Purchase, 1854). Before that, as early as the 1590s, the American Southwest—Texas, Arizona, New Mexico, California and parts of five other states—was being settled by the Spanish.

When Americanos inspired by the Louisiana Purchase began looking for cheap land in Spanish territories in the 1820s, they encountered an entrenched culture that was alien to their own, but well-adapted to the rigors of an arid, rugged frontier. Vast tracts of land (called haciendas and rancheros) had been deeded to well-connected Spaniards by the King of Spain. The patróns of these land grants primarily raised free-roaming cattle (vaca) herded by hired hands on horseback (vaqueros), a practice dating from the Middle Ages, when Spain was still under Moorish rule.

Riding compact, high-spirited horses with Arab bloodlines, vaqueros typically wore a wide-brimmed sombrero to protect their heads from the brutal sun, an oversized neck scarf to filter dust and a short-waisted chaqueta (jacket). Leather chaparejos (chaps) protected their legs from thorny brush. Their lower legs and feet were guarded by pantalones (pants), buttoned with silver or tin conchas down the side of each leg, tucked into high-topped leather botas (boots).

To get their horse’s attention, vaqueros attached metal espuelas (spurs) to their boots. They rode deep-seated saddles with horns, which they wrapped the lariat (la reata) around to stop the targeted livestock caught in their rope. Americanos Anglicized this action, dar la vuelta (give the turn), to dally.

Americanos readily adopted or adapted most of the Spanish/Mexican ways of dressing and working with cattle from horseback. Today’s buckaroos—a distinct subset of cowboys associated with Nevada, Utah, Oregon and Idaho—draw their style of clothing and horsemanship from Californio vaqueros. (Americanos heard the initial sound as a “b.”)

Buckaroos eschew the black hat with the cattleman’s crease and scoop shovel brim popular among cowboys east of the Rockies. A buckaroo hat is often a shade of heat-reflecting gray or sand, with a low, flat crown and a brim as flat as the floor of a Great Basin valley. The hatband is a wide, plain grosgrain ribbon (with matching brim edge). The single embellishment might be a braided horsehair stampede string (estampida) to keep the hat from flying off.

The buckaroo wears an oversized silk neckerchief, knotted or secured with a silver tie slide as a matter of personal taste, financial reality or both. He sports a vest over his buttoned-to-the-collar shirt, while his jeans may be held up by a hitched horsehair belt, with basket-stamped leather billets, secured by a three-piece buckle set. Under fringed half-chaps called “chinks” or armitas (originally a divided leather apron), his jeans are stuffed inside the tops of his 15-inch-or-taller boots. The blued spurs on those boots will sing merrily, thanks to the jingle bobs on the rowels.