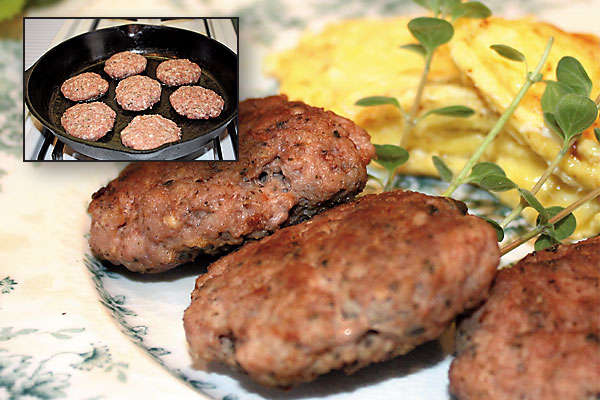 “One of the most prevalent superstitions was regarding the burial of partially decayed materials under steps of the house of the person to whom one wished harm.

Some prescriptions meant death, some insanity and others only ill health.… The ‘crazy dose,’ or concoction to procure insanity, was administered by putting herbs in the victim’s coffee,” recalled Mrs. John Coleman, the daughter of a Texas Ranger, as she reminisced about the early days of Texas.

Herbs, as we know them today, were mostly used for medicinal purposes during the 19th century in the Victorian West, but two herbs, namely sage and mint, were frequently used for cooking.

By 1896 though, the European trend of using a variety of herbs was reaching the states. Popular herbs included marjoram, sorrel, chives, tarragon, chervil and savory. That same year, the Emporia Daily Gazette from Kansas reported, “Herbs used in cookery, while they may be purchased in the markets of the larger cities of the United States, are rarely procurable in those of smaller towns. To the average ruralist they are unknown, or, if known, their use is not understood.”

Pioneers may have been hesitant to cook with herbs because, in the Victorian West, they were often sold by traveling salesmen as cure-all medicines. “Shows would come and stop, giving a free show and then selling herb medicines,” George Dunn of Dewitt, Nebraska, recalled about life in Beatrice after he moved there in 1871. “They would give a lecture on the herbs and then would sell the stuff. They would guarantee the medicine or give the money back. Of course, they would soon be out of town so the people never got their money back.”

Despite the hucksters, pioneers did have legitimate medicines made from herbs and barks, with American Indians and Chinese immigrants among the chief users of herbs for medicinal purposes. Yet because of its usage in medicine, pioneers were hesitant to cook with herbs. European reports of herb cookery had not changed the locale of where most customers found their roots and herbs. In 1892, residents of Tombstone, Arizona, got their fresh roots and herbs at Miller’s Drug Store, as advertised in the Tombstone Prospector.

As the turn of the 20th century neared, herbs were steadily gaining popularity for cooking. In 1899, the Fort Worth Morning Register even ran an ad explaining how to dry herbs: “Herbs which are to be dried should be gathered on a fine, dry day…tie them in bunches and hang up in the sun to dry.…Directly the leaves are withered and crisp remove them from the stalks and reduce them to a fine powder in a mortar.…”

Herbs in the late 1800s not only included sage, mostly used to season pork sausages, and mint, used for juleps and jellies, but also greens like watercress, escarole, endive, dandelion, Swiss chard and chicory. Popular herbs that were grown in home gardens and then dried included sweet herbs, like marjoram, savory, lavender, sage, mint and basil.

Flavor up your sausage the way the pioneers did in San Francisco, California, in 1878. Make your sausage with fresh or dried sage and marjoram—it’s easier than you might think!