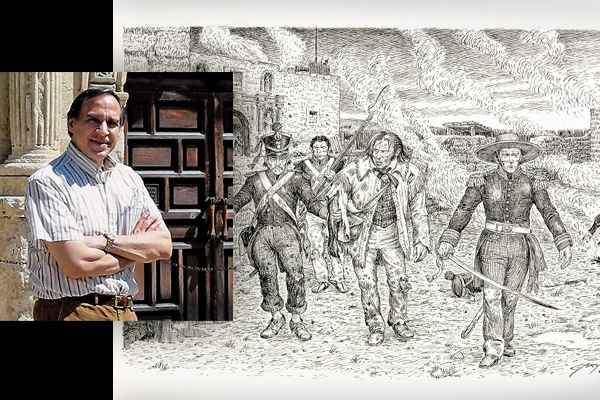 “It is less about bravery and courage than it is about the challenges suddenly thrust upon mostly ordinary people in the wilderness,” Gary Zaboly says. “They were forced to discover the reserves of strength and bravery within them—not to mention a host of other human characteristics, not always admirable ones. That ‘ordinary’ zone is one I prefer to depict—not the moment when the zealot dies gloriously cradling his flag, or the defenders of a fort, portrayed in godlike fashion, holding off the enemy tide, and having such extraordinary courage that none of us could ever hope to match them.”

Wanting to be an illustrator ever since he began watching B-Westerns as a kindergartner, Gary Zaboly wrote to historians who inspired him and included his sketches with the letter. “After a while they called upon me to produce original artwork for their new books and other media,” he says. “And voila! I had my first published historical illustrations.”

Since then, he has illustrated well-known figures from Gen. George Custer to Teddy Roosevelt, but his undeniable favorite is frontiersman Davy Crockett, whom Zaboly has admired since the release of the 1950s Disney mini-series. His fascination with the iconic folk hero has led him to illustrate books covering the history of Texas, such as the Blood of Noble Men: The Alamo Siege and Battle; Texian Iliad: A Military History of the Texas Revolution; and, most recently, An Altar for Their Sons, which took 18 years to complete.

“I learned that there remains much unexplored documentation concerning the story of the Alamo, and that the fort itself was not the rubbly wreck of a place that movies, artists and modelers have made it out to be,” he says. “The word ‘strong’ was constantly used in 1835 and 1836 to describe it.”

Zaboly will continue to illustrate the raw reality of the West, from its dirty buckskins to its architecture, without resorting to glamorization or romanticism. “I’m currently illustrating a book on the Mexican-American War, and am about to produce a series of illustrations depicting a certain Western tribe,” he says.