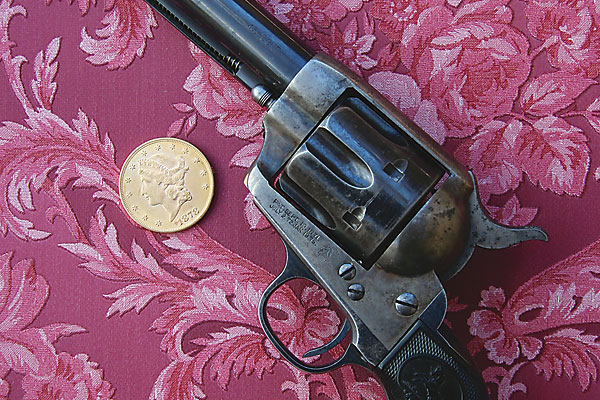 That was nearly a month’s wages for a laborer. You could purchase one with a $20 gold piece—the old “double eagle” (which, interestingly, weighs about an ounce)—and get a couple of dollars in change. How often have you heard the phrase “good as gold” when someone is referring to the approximate value of something? In the case of the Colt Single Action Army (SAA) revolver, this measurement of value may have more validity than it would at first appear. Throughout the history of this gun, it has maintained a trade value the same as—or more than—one ounce of gold.

For many years after the Colt SAA was reintroduced in 1956, gold had stabilized at $35 per ounce, while a new Single Action Colt would cost you $125. By the mid-1980s, gold had soared to prices that ran around $500-$600 per ounce, depending on the daily market prices. By then, a brand new, standard-grade blued and color case hardened Colt SAA (offered as a “special order” gun from Colt’s Custom Shop) was costing around $750-plus in most gun shops, and more if purchased directly from Colt’s Custom Shop, where they were personalized to the purchaser’s own taste.

Today, with gold selling for around $700-plus per ounce—give or take (as of this writing)—and a new Colt now carrying a manufacturer’s suggested retail of $1,290 (blue) and $1,490 (nickel), one can see that—as an investment—the old Peacemaker Colt has certainly done better than hold its own through the years with that ounce of gold.

Let’s take a modern-day look at a Colt SAA produced around the time when the Peacemaker first made its appearance—and a $20 gold piece from the same era.
In today’s collector market, a 19th-century $20 gold U.S. coin in fair condition could be worth roughly around $800, while a circa 1873 double eagle in mint condition will set you back about $3,000 or more—depending on mint marks and other specifics of interest to numismatists. Not a bad increase, eh?

Well, according to the most recent edition of the Blue Book of Gun Values, vintage 1873 Colts with only about 10 percent finish start at around $15,000, and early Colt Single Actions in 80 percent condition or better easily sell for prices in excess of $55,000. In fact, more than one in such condition has brought well over $75,000 at gun collector shows and firearms auctions in recent years, and those 1870s Colts with martial markings or engraving, pearl or ivory stocks, and other special features have sold for much more. Even Peacemakers from as late as 1896 (with blackpowder frames) will command prices starting at around $4,000. Are Colt Peacemakers as good as gold? You bet … and then some!