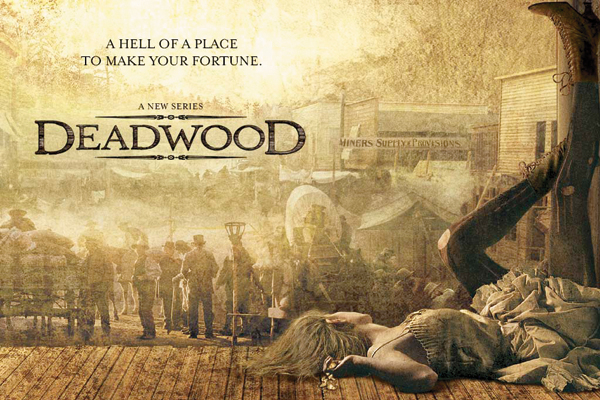 The HBO series, Deadwood, created by David Milch, is to the TV Western what Tombstone was to the big screen 12 years ago—an adult look at the legendary frontier town done in period style and vernacular.

The first two years of the series are bestsellers on DVD, and the third season, which wound down this past summer, has garnered more attention and critical acclaim than any cable TV series in 2006 after The Sopranos.

The year 2006 marks Deadwood’s final year as a series. But thanks to fans who fired off angry letters to HBO when the cabler announced it wanted to focus on a surfer project for them instead of the fourth season of Deadwood, Milch has made a deal with HBO for movie-length specials to bring the story to a natural conclusion. Right when all this hoopla surrounding the miniseries began and before the Third Season aired, I talked with Milch.

By now, we’ve all seen what was almost the last word on Deadwood. (The only story line that didn’t make it into the final season was one connecting Wyatt Earp to Hearst. But the real Wyatt hadn’t known Hearst in 1877, so it’s a good thing Milch chose to leave that plot point out.) Yet the miniseries is due out sometime in 2007. Hopefully it will placate those fans who were none too happy with how the Third Season ended.

TW: You’ve created a TV series that has radically altered people’s view of the American West, and yet, the only thing that most people focus on is the swearing.  Are you getting a little tired of that?

DM: Well, yes, if that’s the only thing they focus on. On the other hand, if all the talk about the swearing brings people to the show and gets them interested, that’s a good thing. I’ve never taken any particular pleasure in using what people refer to as “dirty words.” I was always more interested in the language of the period as a whole. I did a lot of research on oral history and the development of language at the Library of Congress, and I read H.L. Mencken on the subject, too. I’ve always been fascinated on what I call the “specialized locutions” that develop in any environment that is isolated, like Deadwood was, where the people in that environment tend to deal only with each other. In circumstances like that, a language grows which is rich with expressions that you won’t find in other places. I would hope viewers, as they follow the show, will recognize how rich the language is as they become more familiar with the characters and their specific means of expressing themselves. I hope viewers will put the language in context….

And stop focusing just on the swearing?

So-called obscenity has no appeal to me one way or the other. I’ve always found some people’s horror at obscenities to be a little silly because anyone can make up words more obscene than the ones that are commonly used. The point, after all, is the context in which words are used.

Will you give me an example?

In NYPD Blue, I wrote a scene where Andy Sipowicz [played by Dennis Franz] was interrogating a suspect. The network people said I couldn’t use some of the words that I used, so I decided to invent my own. I referred to someone’s private part as a “goonyaw.” They had no trouble with that because the word doesn’t exist. I checked it out—there is no such word.

Hey, he might have if he knew what it meant. By the way, did you know Swearengen had a twin brother?

My God! No! The idea of someone cloning Ian McShane is absolutely terrifying! Was he anything like Al?

Not as far as I know. He seems to have led a comparatively decent life, but then, I guess anyone’s life is going to seem decent compared to Al Swearengen’s.

I know you did an amazing amount of background work for Deadwood. What books would you recommend to people who want to bone up on Deadwood?

I used a lot of sources that are available, if not all that easy to find. Professor Howard Lamar of Yale University did a brilliant paper on politics in the Dakotas of that time and place. For a book on the period written by someone who was there, McClintock’s is great [John S. McClintock’s Pioneer Days in the Black Hills]. A good overview of Deadwood written by a modern historian is Watson Parker’s book [Deadwood: The Golden Years]. There was a great photo album by a woman named Fielder [Mildred Fielder’s Wild Bill and Deadwood]. A book by Seth Bullock’s grandson [Seth Bullock: Frontier Marshal by Kenneth C. Kellar] was helpful and had a lot of good information, though one never knows entirely how much stock to put in some of the stories.

Speaking of putting stock in stories, you have interesting characters making their appearances this season: Gerald McRaney, yet another actor slated to bring lightness and frivolity to the show, will play George Hearst, and Brian Cox, Mr. Warmth, will also show up. Gale Harold will play Wyatt Earp, and Austin Nichols plays his brother, Morgan. There isn’t much written on Wyatt Earp in Deadwood.

The funny thing is, he apparently told Stuart Lake, who was preparing Wyatt Earp: Frontier Marshal, that Deadwood wasn’t so wild. I think the quote from the book is something like “compared to the Kansas cowtowns I knew, Deadwood was a law-abiding town.” Wyatt’s point was that no business influences restrained the law from dealing with the town’s rowdier elements, as there were in Wichita and Dodge City, where community leaders wanted the cowboy business and often convinced officers not to pull their punches. Do you think there’s anything to that?

I think it might have appeared that way to Earp because Deadwood was more about intrigue. There was probably less violence on the surface and probably more going on beneath it than Earp knew about. I think it’s correct that in Deadwood, at least, you didn’t have a lot of drunken cowboys shooting off guns in the street.

Earp mentioned that to Lake, but not much is said about it in the book. He did mention knowing Seth Bullock, or at least Lake worked Bullock’s name into the text. It’s possible that Lake knew Bullock through Teddy Roosevelt, but he made no comment on how Bullock and Earp got along with each other.

There’s a story about them having a clash—I don’t know how true it is.

The only thing I’ve ever seen in print is a brief passage in Kellar’s book.

Yes, I found that, too. I believe all that Kellar says is that Earp was looking for a law position but that Bullock told him they were all filled. I don’t know that Kellar’s assertion is corroborated through any other source.  Earp said somewhere that he was working for Wells Fargo when he was there, but that doesn’t check out. Wells Fargo didn’t have a stage line through Deadwood back then … it’s logical [to me] that he would have clashed with Bullock in Deadwood.

He may have been working for a stage line leased by Wells Fargo. Records indicate he ran gold shipments from Deadwood to Cheyenne. Also, we know he made some money hauling wood to the camp.

That’s possible, particularly the wood hauling, which he apparently did do.

When Deadwood first aired on HBO, a lot of people were scrambling to find its inspirations. Some said Peckinpah, a few said the Westerns of Walter Hill, which is interesting because he directed the Wild Bill movie with Jeff Bridges and directed the first episode of Deadwood. Midway through the second season, though, I understood that the show’s antecedents weren’t really Westerns—or am I wrong?

No, you’re quite right.  I did want to do a show on the American West, but I didn’t want to do a Western. I’ve never really understood or cared for the conventions of the Western. I always thought the genre had more to do with what the Hays office would allow than with what happened on the American frontier. The more I came to read about the West, the more I realized how little what we called “Westerns” had to do with the West and how much they had to do with the vision of European Jews in the movie business who made a fortune selling a sanitized idea of American history back to America. The Hays code said right up front that obscenity in word or action was an offense against God and man and could therefore not be depicted on a movie screen.

I’d say you obliterated the stated ideals of the Hays code in the first 10 minutes of the first episode of Deadwood.

Would it be fair to say that your intention was to do a revisionist Western?

No, not really, at least that’s not how I started out. At the beginning, I wasn’t really reacting against anything. What I was really interested in was the development of law and order, or, specifically, how does order develop without law … I don’t know if I’m making any sense.

Do you mean in circumstances where there is no lawful authority?

Yes, that’s exactly what I mean. In developing societies, in frontier societies where there is no central authority, or where the authority is not opposing law, how does order develop? It isn’t just a matter of brute force—even brute force can only be used by somebody with an idea of order. How does chaos evolve into order….

I’m sorry, I don’t mean to laugh, but as you said that a scene popped into my head. In Blazing Saddles, in the courthouse scene that parodies the one in High Noon, somebody bangs a gavel and hollers “Order!” Another character says.…

Yes, yes. “You know, as Nietzsche says, out of chaos comes order.” A great moment.  What does it tell you about the strict conventions of Westerns that the only time that question has been asked is in a Mel Brooks movie?

I take it you weren’t raised on Westerns?

No, when I’d see Hopalong Cassidy or something like that, I always felt, I don’t get it.

Are there any modern Westerns that grab your attention? Some people have seen connections between 1993’s Tombstone and Deadwood.

Well, one reason is because there were so many similarities between the towns of Tombstone and Deadwood….

Both of which, to varying degrees, outside the realm of legal authority.

Yeah, that’s right. Beyond that, I wouldn’t call Tombstone an inspiration by any means, but I have to give it credit—it got me to sit up and pay attention right from the start. Its look, the rhythm of the dialogue, you could tell right away that this wasn’t the traditional Western. The whole movie doesn’t hold up like the first half, but it’s different and interesting.

The intensity at the heart of Deadwood seems hard to sustain. Some have called the show to our time what Gunsmoke was to half a century ago, but it seems to me that the ideas that propel Deadwood can’t be sustained for a couple of decades. How long do you envision it lasting?

You can’t sustain Deadwood for that long because the forces that created it, that made it an illegal town in the first place, were not that stable. Things change too fast. There was a big fire in 1879, and, well, fires always make good plot points. And, of course, there was the railroad coming to Deadwood, finally a direct and easy connection with the outside world, and that really changed things. Buffalo Bill once said “When the railroad comes, the story is over.”